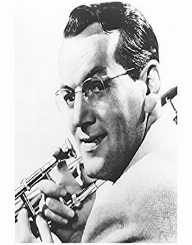 Glenn Miller was an American composer, Swing bandleader, and arranger born in March 1st, 1904. He is best remembered for his work “Chattanooga Choo Choo," "In The Mood," and "At Last." Which were great hits. His ambition to complete his studies at the University of Colorado in Boulder was not successful after he failed three classes out of five. As a result, Miller decided to quit his education at the university. During his career in the music industry, he kicked off with a movie starring George Burns. This was in 1936 at The Big Broadcast.

Glenn Miller was born on March 1st, 1904. His place of birth was in Clarinda, Iowa in the United States. He was the son of Lewis Elmer Miller and Mattie Lou.

Glenn Miller was forced to change schools many times following his constant movement of his family. He began his studies in North Platte situated in western Nebraska, a grade school. After that, his family relocated to Grant City, Missouri in 1915. Around this time, he played mandolin and cornet. Later in 1916, he also started playing trombone.

In 1918, his family relocated once again to Fort Morgan in Colorado. This is where Glenn Miller attended high school. Towards the end of 1919, he became a member of Maroons, a high school football team. He proved to be a talented footballer and became the Best Left End in Colorado.

As a senior in high school, Glenn Miller grew a passion for "dance band music," which was a new style in music. Therefore, he decided to form a band along with some of his classmates and friends who had the same interest in music. He later graduated in 1921 and decided to be a professional musician was his dream. Therefore, he joined Boyd Senter's orchestra.

In 1923, he joined the University of Colorado after quitting the orchestra. However, a year later he dropped his studies to pursue his music career.

After dropping out of the university, Glenn Miller moved to Los Angeles, California where he joined Ben Pollack’s band.  He worked with the band for a while before heading back to New York City. While there, he focused on his attention as a freelance arranger and trombonist. Glenn Miller later worked with Tommy Dorsey's band as its musical director in 1934.

From 1935, Glenn Miller began recording songs under his name. However, this journey was not a smooth one for him at first. Still, he was determined to be successful hence fought his way to fame by establishing his band. His first hit was "Wishing (Will Make It So)" in 1939. In the same year, his single “Moonlight Serenade," was even more successful.

Glenn Miller joined the film industry for the first time in 1941. Along with Sonja Henie, he made his debut film titled Sun Valley Serenade. Later in 1942, he appeared in Orchestra Wives. However, his newly found career in film was interrupted that same year. This is because he had to serve his country after he was inducted into the U.S. Army. After a while, he was positioned in the Army Air Force.

During the Second World War, he led the U.S. Army Air Force Band. The band performed many shows to entertain the troops and take their minds off war for some time.

Glenn Miller tied the knot in October 1928 to Helen Burger. Together they adopted two kids namely: Steve and Joanie

Glenn Miller breathed his last on December 15th, 1944 at the age of 40. His death was mysterious given that his body was never found. Before his death, he was last seen on board of a plane intended to head to French Capital. However, he never arrived at his destination.