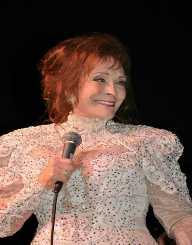 Loretta Lynn is known as a legend star performer who dominated the men’s world of country-western music. Loretta’s country roots are unique, and you will never come to compare her style with other rural songs. She is famously known as ‘Coal Miner’s Daughter,’ but this didn’t stop her from achieving her best in life. In fact, she rocks the list of the ‘First Lady of Country Music.' In addition to holding the ‘first’ rank, Lynn was also ‘appreciable’ and very ‘different’ from other artists. Till now, Lynn has released more than 60 albums and 160 songs. Not to mention she has managed to sell over $45 million records globally.

On 14 April 1932, Loretta Lynn was born in Butcher Hollow, Kentucky, United States. She was born in a direly impoverished environment. She spent her childhood days with her seven siblings but surrounded by a musical environment. She once thought that everybody had a talent to sing, till when she moved out of Butcher Hollow. At the age of 13, Loretta married Oliver ‘Doolittle’ who was a veteran. Doo was 21 years of age. When she was pregnant with her first child, the couple moved to Custer, Washington. By the time she turned 18, Lynn had four children twin in 1964 and another two. She tried to forget about her life as she thinks what will solace her for eternity. That is where she opted to choose her musical talent. Before fame, Lynn used to do household chores for seven days a week. She devoted time and work for 15 good years before embarking on her singing career.

Lynn’s husband heard her voice while she was busy with house chores. He surprised her with a guitar when in turn she self-taught herself how to play and write songs. He wrote two songs, but she didn’t like the tone in them. That is where she bought a Country Song Roundup. In reality, Loretta’s songs narrated her childhood life and everything that surrounded her at that point. She took a break from her stay at home mom to a performing mom in local nightclubs.
Prominent executives from the Zero Records gave her a chance to record her first album titled ‘I’m a Honky Tonk Girl.’To make her music more interesting and unique, Loretta made a fringed cowgirl outfit for herself. While still at it, her husband promoted her songs by moving from one station to the next. To their surprise, their marketing skill worked, and the disc ranked the summer charts of 1960.That is what brought Lynn’s family to the Music world.

Lynn began to sing regularly at countable events and ceremonies. Luckily, Wilburn Brothers show stood by her till she came to produce her second album. Without satisfactory results, Lynn landed a contracted at Decca Records. Her first Decca’s album topped at number 51 and the top ten hits. She received hundreds of invitations and later went to join the Grand Ole Opry later that year. Her fellow artist, Opry taught Lynn how to dress trendy as well as wearing make-up. She was aired on Wilburn’s national syndicated television series. In 1994 she sang a series of the song with her family friend, Ernest. She released ‘Happy Birthday’ and ‘Wine Women’ songs that turned into a national chorus. She aimed to sing from the women point of view. She wanted to have more women as her fans, unlike men.

In 1967 Loretta collaborated with famous artist such as Conway. In 1971 the team received a Duet of the Year Award. The same year she was showered with BMI songwriting honors, Grammy Award, Gold Record plaques among others. In 1972 she became the first woman to receive the Country Music Association Entertainer Trophy.

By the end of the 1970s, Loretta was a quenchable superstar. She traveled far and beyond as well as appearing on different covers of Redbook and Newsweek magazines. With her attractive beauty and humor, Loretta became a TV talk-show host. She continued to rule the country music charts by scoring prominent hits, particular ‘Somebody Somewhere’ song in 1977. She followed it up with ‘Out of My Head and Back in My Bed’ in 1979.

Loretta Lynn’s husband died in 1996. She was devastated and didn’t admit that he died till when she came back again with a new album in 2000 titled ‘Still Country.' In her later years, Loretta has passed through a series of health complications. In 2013 she received bad news of her eldest daughter death, Betty Sue who died of emphysema complications. From cleaning the house to picking the berries and working seven days non-stop, Loretta proved that she is a work-in-progress woman. She knows how to survive and strong woman is her second name. She defines herself as a local woman and not a legend as she continues to write her song and tour around the world.