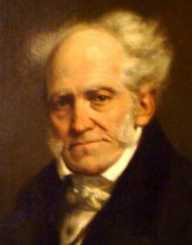 Arthur Schopenhauer’s early years were spent in the Polish region of Gdansk. He was born on 22nd February 1788. His father, Heinrich Floris Schopenhauer was a merchant with immense wealth while his mother was a much younger woman named Johanna. His father was very republican in outlook, and over time, his push for enlightenment was at odds with the prevailing wave of thought in Danzig. This led to his immigration at this time. Arthur lived with a French family at the behest of his father and became fluent in French over the next two years.

While Arthur Schopenhauer took an early interest in scholarly work, his father wanted him to become a cosmopolitan merchant like himself. His father took him on trips across Europe in his early years, and he was exposed to the life led by poor folks. This became the window that shaped his somewhat pessimistic slant of philosophical worldview. Arthur lost his dad when he turned 17 years old, and his sister, Adele and his mother was what was left of his family. They became heirs of a fortune and Arthur began schooling at the Gotha gymnasium. He got a hold of Latin and Greek early in school but was sent away from school after his altercation with a teacher.

The death of Arthur’s father gave his mother much liberty to become who she desired to be, and this led her to live an intellectual and social life. She started out in writing while also serving as a hostess. She owned a salon which in no time attracted the likes of Christoph Martin Wieland, Johann Wolfgang von Goethe as well as Karl Wilhelm Friedrich and August Wilhelm. It was at the salon that Arthur got introduced to Goethe. Goethe and Arthur collaborated later on to propound the theory of colors.

Arthur Schopenhauer's draw to Eastern thought was cultivated when he encountered Friedrich Majer, who was considered as Orientalist scholar. The rolling years did no good to Arthur’s relationship with his mother as they became rampantly at odds. His mother told him off by the time he turned 30 as his criticism of her reached a height. She barred him from ever getting in contact with her again.

Arthur Schopenhauer attended to his higher education with a stint at the University of Göttingen. He was studying Medicine for the next three semesters before turning to Philosophy. He got under the tutelage of Gottlieb Ernst Schultz. The underbelly of Gottlieb’s work was the criticism of Kant’s theory of transcendental idealism. Schultz’s tutelage of Arthur Schopenhauer took off on the note of an in-depth study of Plato and Immanuel Kant. These two philosophers largely shaped the development of Arthur and the framing of his ideological leaning.

When he was exposed to the works of the equally regarded Friedrich Wilhelm Joseph von Schelling, his inferences became one he grew highly critical of. Arthur took time off to attend Johann Gottlieb Fichte’s lectures in the year 1881 at Berlin University. Johann was one of the most celebrated philosophers of German descent at this time. Another alter ego of Plato was Friedrich Schleiermacher, and Arthur also attended his lectures, which distinctly featured a commentary on Plato’s works. Schopenhauer was not cozy with the thoughts of intellectual life found in the academia for long as he paused to view them as far-removed from untainted philosophy. He saw them as blighted by competing for theological frameworks.

Arthur Schopenhauer's early works included the 1818 publication, “The World as Will and Representation.” He started out on the job in the year 1814 but did not complete it until four years later in 1818. When Arthur launched the first volume, such topics covered were an ontology, ethics, aesthetics, and epistemology. His attempt at lecturing at the University while in Berlin was not fruitful as only five students attended his classes. He opted out of the Ivory tower after that. His next body of work was surmised in the 1831 book, The Art of Being Right: 38 Ways to Win an Argument.
Arthur Schopenhauer espoused 38 options that could be put to work if you are keen to defeat an opponent in any debate. He penned a controversial intro to the book when he stated that philosophers of the era since Immanuel Kant did not explore the depths of dialectics of controversy.

Arthur explored the subject of free will when put out the essay titled ‘On the Freedom of the Will.’ Here, he provided answers to the 1938 question posed by the Royal Norwegian Society of Sciences. He gave clues that will answer the poser “Is it possible to demonstrate human free will from self-consciousness.” By the year 1844, Arthur Schopenhauer launched out a second volume of the book “The World as Will and Representation.” The second volume was an array of essays that dwelt further on the topics that were contained in the first volume. The most important subjects he was associated with were his slant and thoughts on sexuality as well as his reflections on the subject of death. Arthur's essay titled ‘Of Women’ was published in 1851 and he attributed to them less capacity to be reasonable and to make decisions. He coined the tag of “weaker sex” in describing women.

Arthur Schopenhauer is commonly attributed as the artist’s philosopher. His works are seen as inspiring artists of all persuasions. His deep thoughts on the value of existence are primarily viewed as pessimistic
Arthur was able to craft prose in such elegant fashion with a muscular élan that put him out as one of the foremost German stylists. His range of work influenced other philosophers like Friedrich Nietzsche, Ludwig Wittgenstein, and Sigmund Freud among others.

Arthur is largely cited as the first philosopher of German descent to incorporate Eastern philosophy in his writings.

Arthur Schopenhauer is not known to have married in his lifetime although he courted an opera singer, Caroline Richter at some time in 1821.