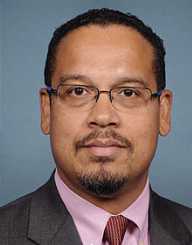 Keith Ellison is the first African-American elected official from the House of Minnesota, as well as the record-holder as the first Muslim to ever hold a seat in US Congress. Since 2007, he has served as the 5th Congressional of Minnesota's US Representative. During his service as a government official, Ellison helped pass the law in Credit Cardholder's Bill of Rights 2009. The law states the prevention of the practice of universal default. Universal default is a financial practice in the US that lets lenders raise the interest rate for late payments.

He also wrote the Protecting Tenants in Foreclosure Act to counter the 2008 repossession crisis back then. The law states that banks and owners to issue at least a 90-day notice of eviction for reclaimed homes renters.

Born as the middle child of Leonard and Cilda Ellison on August 4, 1963, he was raised in a family that practiced the Catholic faith in Detroit, Michigan.

His father worked as a psychiatrist while his mother as a social worker. Ellison pursued law with his three other brothers while another brother served as a pastor in Detroit.

Growing up, Ellison and his family were immersed in the Civil Rights Movement.

He was an active student in high school while attending the University of Detroit Jesuit High School and Academy. While pursuing a degree in economics at Wayne State University back in 1987, he converted to Islam. He was 19 at the time.

Upon his graduation at Wayne State, he married his wife Kim and relocated to Minneapolis to attend law school at the University of Minnesota.


The First Muslim Elect In Office

Before being elected as congressman, Ellison worked on trial practice at the law firm of Hassan & Reed Ltd. Prior to that, he served as Legal Rights Center's executive director. The organization caters to clients who have limited to no funds.

Ellison was elected as a member of House District 58B come November of 2002.  It was his first public service of the Minnesota House of Representatives.

He won the House Seat on Minnesota's 5th Congressional District Election in 2006. Martin Olav Sabo was his predecessor. He won 56% of the votes against fellow candidates Alan Fine, Jay Pond and Tammy Lee.

Sworn on the 4th of January 2007, Ellison firmly stated his advocacy on wages and housing. He took part in the voting of the 100-Hour Plan. The 100-Hour Plan's aim was to raise the minimum wage. He also stood by stem cell research, allowing Medicare to make arrangements involving pharmaceutical prices.

Following these actions, he formally introduced to Congress the Money Remittances Improvement Act of 2014. The proposed piece of legislation was to ease money service businesses to provide remittance internationally.

He also held a position in the Congressional Progressive Caucus for the 113th Congress as co-chairman. The Congress encourages equality for all.

Ellison has been involved in community service way before he joined politics. He often volunteers to play as the coach for several community programs and even as the presenter in of a talk program in KMOJ radio, without pay. He was greatly influenced by his parents' involvement with community services as well as his grandfather's works. His grandfather was a member of the National Association for the Advancement of Colored People which also involved himself with.

He has also shown support for the standardization of US relations with Iran. Aside from this, he stands on the pro-choice for abortion and supports the LGBTQ community. He was an official for the Congressional LGBT Caucus in Congress.

In line with politics, he is a known as a vocal critic of 41st President George Bush's administration. President Bush was against HR 1591 that funded the Iraq War. HR 1591 contains timetables for withdrawals for the war. Ellison, along with other House Democrats, voted otherwise. He was also against Bush's plan to increase troop levels in Iraq, supporting fellow Democrat Tim Walz.

Alongside Dennis Kucinich on June 2007, they filed an impeachment complaint to then-Vice President Dick Cheney under the charges of high crimes and misdemeanors. He has also shown disapproval to 45th US President Donald Trump's administration that he even boycotted Trump's inauguration, along with other Democrats.

Ellison made an announcement on June 2018 of his plan to run for Minnesota Attorney General rather than be reelected for Congress.

On his inauguration day, Ellison was the spark of controversy for his use of the Muslim's holy book, the Koran, instead of using the Holy Bible. The said Quran was previously owned by early predecessor past President Thomas Jefferson. The Library of Congress lent the Quran for his oath-taking ceremony.

In April 2009,  Ellison protested to Omar al-Bashir, then-president of Sudan. He was accompanied by 7 others at the protest. Al-Bashir demanded that international aid groups leave Sudan. This protest then led to the arrest of Ellison and his companions under civil disobedience.

Ellison has been the recipient of the Trailblazer Award by the American-Arab Anti-Discrimination Committee and a Visionary by the Utne Reader magazine in 2011.

He has a book published in 2014 under his name entitled, "My Country, 'Tis of Thee: My Faith, My Family, Our Future". In the book, he talks about his ideas and goals towards reaching the American dream and the definition of being an American in this day and age.

His son, Jeremiah, followed in his political footsteps. Jeremiah ran and won a seat to the City Council of Minneapolis in 2017. His other children also took degrees in law save for one who went on to become a doctor.