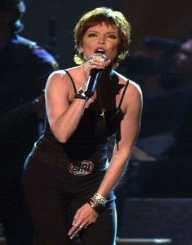 Pat Benatar was born on January 10, 1953, in New York City, New York, USA. She was not always Pat Benatar, as her maiden name was Andrzejewski.  Her parents are Andrew Andrzejewski, and Mildred Andrzejewski, who also had a career in music as an opera singer.

Pat was interested in music even as a child. She loved to sing, dance, and watch shows in the theater. She performed in concerts at her elementary school. As she left elementary school and made her way into high school, she continued to practice music.

Pat Benatar was a part of the theater, school marching band, and she sang. She mostly worked with classical music and music that was sung in the theater. She only went to college for a year before deciding that she would much rather pursue a musical career than anything else.

Pat Benatar worked as a bank teller after she was married to her first husband until 1973. She quit her stable job to follow her dream of being a singer. Like her mother before her, Benatar spent some time singing in operas. She also worked as a lounge singer, comedy club entertainer, and in the theater actor and singer.

Although Pat had worked with classical music in her youth, she aspired to be a rock singer. Her musical career finally took off when a guitarist, Neil Geraldo (who would later become her second husband) noticed her voice and helped her to launch her professional music career. She signed on with Chrysalis Records shortly after.

Pat Benatar put out her debut album in 1979, called In the Heat of the Night. This album was extremely popular, and it motivated her to put out her next album in 1980, called Crimes of Passion. The songs on this album and her following albums were full of chart-topping songs and catchy lyrics.

Some of her famous albums are listed below. Pat had many successful tours, traveling throughout the United States and even to come countries on other continents, including Asia. Throughout her career, she earned her millions of dollars, had ten platinum albums, and eight number one singles.

Throughout her career, Pat Benatar has earned four Grammys, one for the album, Crimes of Passion; and three for the songs Fire and Ice, Shadows of the Night, and Love is a Battlefield.

She was inducted into the Long Island Music Hall of Fame in 2008.

In 2010, Pat Benatar wrote a tell-all autobiography about her personal life and musical career, which was titled Between a Heart and a Rock Place.

Pat Benatar was first married in 1972 to Dennis Benatar. This couple had no children together. However, the couple divorced only a few years later in 1972. She remarried in 1982 to Neil Giraldo. Together, this couple welcomed two children into the world, Haley and Hana.