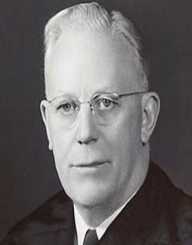 His father Matt Warren came to the United States along with his family as a toddler in 1866 after having been born in Stavanger, Norway in 1864. His original family name was Varren. Warren’s mother Crystal was born in Hälsingland, Sweden with her maiden name Hernlund.

She also migrated to the United States during her infancy. His parents married in Minneapolis, Minnesota, and started residing in Southern California after his father got employed in the Southern Pacific Railroad.

He was the younger of the two children of his parents having an older sister named Ethel. He attended the Kern County High School and received his high school graduation from there in 1908.

Earl Warren studied at the University of California, Berkeley and earned his major in political science. He attended the UC Berkeley School of Law (formerly school's Department of Jurisprudence) and received a Juris Doctor degree in 1914. He was admitted to the California bar immediately upon receiving his law degree and started working with the Associated Oil Company in San Francisco.

During Earl Warren's tenure with the Associated Oil Company in San Francisco, he was appalled by the rampant corruption prevailing there at that point of time and chose to work with the Oakland law firm of Robinson and Robinson. In April 1917, United States began participating in the ongoing World War I. Warren was very much interested in joining the officer training camp made for the war but was declined entry due to a physical shortcoming in the form of hemorrhoids.

As he was very keen to serve the army, he underwent surgery to get rid of the problem. However, The Officer Training Camp ceased to function after his full recovery. In August 1917, Warren enrolled in the United States Army and served there for the next one year before being discharged as the First Lieutenant. He received the opportunity to train at the Officer Training Camp after having worked for the Company I of the 91st Division's 363rd Infantry Regiment at Camp Lewis, Washington.

Earl Warren joined a three month’s training course there after being elevated to the post of acting first sergeant of his company. He continued to serve the army in different capacities including a first and second lieutenant and was finally elevated to the position of the Captain in the United States Army Reserve before his retirement from the army in 1934.

In 1925, Warren was appointed as the District Attorney of the Alameda County and was subsequently re-elected to complete three consecutive four-year terms. During his tenure, he earned notoriety for his controversial advocacy for the internment of the Japanese American during the onslaught of the World War II.

The extended period of the World War II saw the fortune of Warren climbing an upward path, and he was elected to the post of California Governor in 1942. He served the position for three consecutive terms and shifted his focus towards national politics while serving his gubernatorial term.

In 1952, Warren expressed his desire to contest for the post of American President on a Republican Party ticket. However, his party nominated General Dwight D. Eisenhower for the coveted post. Eisenhower won the election and became the 34th President of America.

His ruling in some of the famous cases such as Heart of Atlanta Motel, Inc. v. the United States upheld the Civil Rights Act of 1964 and declared racial discrimination in public institutions and public accommodations unconstitutional. He was instrumental in transforming criminal procedure, redistricting, etc. and handed down some landmark judgments on these aspects.

Earl Warren retired as the Supreme Court Chief Justice in 1969 after 16 long years of distinguished service on the bench. He also headed the investigative committee prepared to investigate the John F. Kennedy assassination during the year 1963-64.

Earl Warren married Nina Elisabeth Meyers on October 4, 1925. Nina was a Swedish-born widow who had migrated to the United States along with her parents as an infant. In addition to Nina’s three-year-old son from her earlier marriage, the couple together had five more children.

Earl Warren died on July 9, 1974, due to congestive heart failure after suffering from heart ailments during his final days.