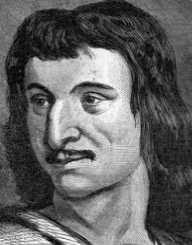 He had four brothers, named Denis, Antoine, Honore, and Abel II. He had a sister named Catherine. When he was three years old, his family moved to a large mansion at Mauvieres and Bergerac in the Chevreuse Valley.

Savinien de Cyrano de Bergerac first took lessons from a priest in the local parish. His father later sent him back to Paris. There, he studied at the College de Beauvais and the College de Lisieux. The polymath Pierre Gassendi also tutored him.

Savinien de Cyrano de Bergerac wrote the novel Comical History of the States and Empires of the Moon. He followed it up with The States and Empire of the Sun. These novels are considered the predecessors of modern science fiction.

He wrote the tragical play The Death of Agrippina. He wrote satirical works to mock his enemies, such as Against an Ingrate and The Minister of State Roasted in Farcical Verse.

Savinien de Cyrano de Bergerac often drank, gambled, and took part in duels. He never married and frequently visited prostitutes. He was supposedly involved in a homosexual relationship with poet Charles Coypeau d’Assoucy. He briefly served in the French army.

The cause of Savinien de Cyrano de Bergerac's death is not completely clear. In 1654, he was injured either by a falling wooden beam or by an attack on the carriage he was riding in. He passed away on July 28, 1655, in his cousin’s home in Sannois. He was 36 years old. It is not clear if his death was a result of his previous injury or if he suffered from an illness. There is also some evidence that suggests that he might have been assassinated.

French poet Edmond Rostand wrote the play Cyrano de Bergerac in 1897. The story revolves around Cyrano’s love for his cousin Roxanne, and it is loosely based on his life.

The play has been adapted into a large number of films, operas, and television shows. In 1900, Louis Gallet wrote the play The Adventures of Cyrano de Bergerac. Cyrano is a character in Philip Jose Farmer’s book series Riverworld, A. L. Kennedy’s novel So I Am Glad, Robert A. Heinlein’s novel Glory Road, and Charles Lecocq’s opera Ninette.