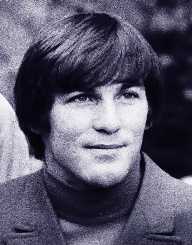 Dennis Wilson was born on Dec. 4, 1944, to Murray and Audee Wilson. He had two brothers, Brian and Carl. Dennis was the middle child.

Growing up with his brother and he faced a hard father.  Dennis Wilson was abusive towards the three of them. But despite the upbringing, they managed to grow up musically talented. Their father would teach them how to play music and sing. But Dennis had problems and slacked off, or wouldn’t sing. But at night, he would sing with them in their room that they shared.

One day the three brothers along with a cousin and a neighbor started a band which they called the Beach Boys. And the music began.

Not sure what to write about, the band was encouraged by Dennis Wilson to write about they did around where they lived- which was surfing and the life. The band wasn’t happy with that, but they agreed to do the feel-good music. Brian was the one at this time who wrote most of the songs of the Beach Boys along with another person they collaborated with after they got a record deal.

In the 1960’s, Dennis Wilson started writing songs. In 1963, he started writing and performing with Gary Usher. The two formed a group called the Four Speeds that went for a little time.

Dennis Wilson had a problem with alcohol and drugs throughout his life. They affected his relationship with the band. Plus, his brother, Brian also had his demons as well. But the two managed to stay in the band and make music. From 1970 to 1973, Dennis wrote some of the songs the band played on the records. This was due to Brian’s inability to be with the band due to drugs and apathy.

Dennis Wilson also worked with other artists such as James Taylor with whom he wrote a song and also with Billy Preston. Not only did he collaborate with another artist but he put out his solo record. He was the first Beach Boy to do so. His album was entitled Pacific Ocean Blue.

The controversy surrounding the album has as much to do with having the type of music on it as well as the unfinished second album. Due to the controversy, the album although re-released in 2008 is not currently available according to some. But the full album appears to be available on YouTube.

What became known as the Charles Manson episode began by him picking up two of Manson’s followers who were hitch-hiking. Although he confirms that the two wrote music together, Dennis Wilson wasn’t talkative about Manson. Suffice it to say he was horrified by the murders and disgusted by Manson. However, he did indeed record the song that he and Manson did together underneath a different title. This caused bad blood between the two and also some death threats against him and his family as well. None of it can be verified. But this episode preceded a prolific writing phase which included his own solo album.

Dennis Wilson did use alcohol and heroin. Before his death, he was homeless and moved from place to place.

Dennis Wilson was married five times, twice to the same woman. His first wife was Carole Freedman whom he married in 1965. From that union, he had a daughter, Jennifer as well as adopted her son, Scott. When that marriage ended he married Barbara Charren in 1970. He divorced her and then married Karen Lamm twice. The first time he married her in 1976, and they got divorced. They then remarried in 1978 and again got divorced. There were no children from any of the two unions. Before his death, he married Shawn Marie Love in 1987. The two were married when he died.

In 1983 he died of drowning while under the influence of alcohol and cocaine. Before his death, he had been requested by the band to get his act together and get clean as well as sober. Or else he was out of the band. As the band was about to start touring he didn’t want to miss out – so he checked himself into rehab. So he checked himself into the facility on Christmas Day in 1983, and then he checked him back out and went to a friend’s yacht.

He had been homeless for a while and a nomad for years before his death. But after his death, he continued to be well known for his life and his shenanigans.

Five years after he died, the Beach Boys were inducted into the Hall of Fame. His album Pacific Ocean Blue was re-released in a C.D. set which included some of the songs from the unfinished second album. But due to issues within the family, his album may not be readily available for sale.

For those who are fans of the Beach Boys remember that people thought that he didn’t play the drums for real? Well, that controversy got put to rest with the information that he does indeed play on some of the songs and stage.

Dennis Wilson lived a fast life and played hard. This is why he died young.