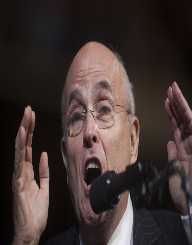 Rudy Giuliani was born 28th May 1944, to Harold and Helen Giuliani. He was born in Brooklyn, New York, United States, and was an only child. Rudy Giuliani's father was a plumber who also did bartending, but was convicted of felony assault and robbery, and had to serve time in prison. After release from prison, he worked for his brother-in-law in an organized crime operation.

Rudy Giuliani and his parents moved to Garden City South when he was seven years old. He went to the local Catholic school, St. Anne’s. When he was older, he made the commute to Brooklyn each day to attend Bishop Loughlin Memorial High School. He graduated in 1961

Rudy Giuliani then went to Manhattan College in the Bronx. He majored in Political Science, with a minor in Philosophy, and graduated in 1965. After his graduation, Giuliani enrolled at the New York University School of Law, in Manhattan, and graduated with his doctorate in 1968.

Rudy Giuliani's first position upon graduating was clerking for Judge Lloyd Francis MacMahon, who was a District Judge for New York. He then joined the United States Attorney’s Office for the Southern District of New York in 1970, and was appointed Chief of the Narcotics Unit and became executive U.S. attorney in 1973.

In 1980, the Republicans were back in power under the leadership of Ronald Reagan. Rudy Giuliani then changed his party registration from Independent to Republican.

Rudy Giuliani was appointed Associate Attorney General in 1981, under the Reagan administration. In 1983, Rudy Giuliani became U.S. Attorney for the Southern District of New York. Although considered a demotion by some, Giuliani wanted the position so that he could litigate himself on cases. He held the position until 1989, leaving when the Reagan administration finished their tenure.

Rudy Giuliani then went into private practice. 1989 was his first attempt to run for New York City Mayor. He lost by a very close margin, in the tightest election ever in the history of running for Mayor. Four years later, Rudy Giuliani ran again, and won the election, to become the Mayor of New York City.

In 1998, a Senate seat became vacant, due to the retirement of Democrat U.S. Senator Daniel Moynihan. Rudy Giuliani ran for the seat in 2000, backed by the Republican Party. He underwent several weeks of extreme pressure when personal details were released into the media. These included the news that he had prostate cancer and had to seek treatment, his extramarital affair, and announcing the separation from his wife. In May 2000, Giuliani withdrew from the running.

Rudy Giuliani has remained politically active since leaving his office as Mayor. He helps Republican candidates with their campaigns, on political levels.

Whilst he was Mayor, gay and lesbian New Yorkers were given domestic partnership rights. Legislation was passed to provide the same protection for same-sex partners as for heterosexual partners.

Rudy Giuliani has received numerous honors and awards, some of which include:

2001:   House of Savoy – Knight Grand Cross of the Order of Merit of Savoy

2002:   Honorary Knight Commander of the Order of the British Empire – by Her Majesty Queen Elizabeth II, for the leadership shown in relation to September 11

Rudy Giuliani had begun dating Donna Hanover, and once he had his legal separation from Peruggi, Rudy Giuliani and Hanover married in 1984. They had two children, a son called Andrew, and a daughter called Caroline.

Rudy Giuliani entered into an extramarital relationship, of which Hanover became aware. Hanover seldom appeared in public with Giuliani once she knew what was going on.

In 2000, Rudy Giuliani filed for divorce from Hanover. The battle became bitter and public. The case was finally settled in 2002.

Although criticized at times, Rudy Giuliani is known as the Mayor who all but got rid of crime in New York with his “zero tolerance” attitude.

He was also recognized for his strength in pulling New Yorkers together after the attacks on September 11.