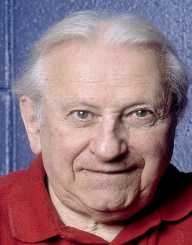 Studs Terkel was born on May 16, 1912. He was an American author. He was also a historian, an actor and a broadcaster. He is renowned for his radio program that lasted forty-five years. He died at the age of Ninety Six Years.

Louis "Studs" Terkel was born on May 16, 1912, in New York City, New York in the United States. He was born to Samuel Terkel and Anna Finkel. In 1920, he alongside his family moved to Chicago, Illinois where he was brought up.

He was brought up alongside two brothers. He later attended McKinley High School. He then joined University of Chicago Law School where he studied Law. In 1934, he graduated.

Studs Terkel started his career by working at radio after joining Works Progress Administration’s Federal Writers’ Project. He later became a central character of the ‘Studs’ place’ which was a television drama.

In 1967, Studs Terkel published ‘Division Street America’ which was his first oral history collection. He also joined the Chicago History Museum where he served as a scholar in residence. He was later featured in ‘Eight Men Out’ film as Hugh Fullerton, a newspaper reporter. In 1974, he wrote and published his book ‘Working.’ In 1978, it was made a Broadway show titled ‘Working.’ In 1982, it was cast on PBS.

In 1982, Studs Terkel received the Honorary Doctorate of Humane Letters from University of Illinois, Chicago. In 1985, he was awarded the Pulitzer Prize for General Non-Fiction due to his book ‘The Good War.’ In 2001, he was inducted into the Chicago Gay and Lesbian Hall of Fame. In 2004, he was inducted into The Lincoln Academy of Illinois and at the same time awarded the Order of Lincoln in the area of communications by Illinois Governor.

In 2006, he received the honorary Lifetime Achievement Award from the Dayton Literary Peace Prize. In 2010, he was inducted into Chicago Hall of Fame.

In 1939, Studs Terkel married Ida Goldberg with whom he had one child. Studs Terkel died on October 31, 2008, of ill health at Chicago, Illinois, United States. He died at the age of ninety-six years.