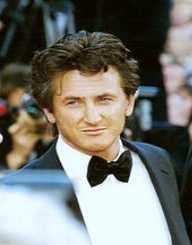 Sean Justin Penn was born on August 17, 1960, in Santa Monica, California. His parents were both actors- Leo Penn and Eileen Ryan. He has an older brother who is a musician, and a younger brother, actor Chris Penn.
Penn’s grandparents were of Lithuanian, Russian, Irish and Italian descent. He attended the Santa Monica High School. his childhood friends were Emilio Estevez and Charlie Sheen, together with whom he used to make short films.

Penn’s first television appearance was in 1974 episode of the Little House on the Prairie, where his father was a director for a couple of episodes. His first movie appearance was in the action drama Taps in 1981. The following year, Sean Penn appeared in the comedy Fast Times at Ridgemont High. His character stoner Jeff Spicoli is credited with popularizing the word “dude” in pop culture. His breakthrough role is considered to be the 1983 drama, Bad Boys.

In 1985, Penn was cast for the role of Andrew Daulton Lee in The Falcon and the Snowman. Lee was a drug dealer and was convicted of espionage, but was released from prison in 1998. Penn then hired Lee as his assistant to reward him for allowing to portray him in the role. In 1986, he starred in the drama At Close Range, which earned him excellent reviews. After that, Penn took a break from acting and focused his efforts on directing.

Sean Penn returned to acting during the mid-1990s. His comeback role was the 1995 film Dead Man Walking, for which he was nominated for the Academy Award. He received another nomination in 1999 for his role as a jazz guitarist in Sweet and Lowdown. His third nomination came in 2001, for the role of mentally disabled father in I am Sam. He won his first Academy Award in 2003 for the film Mystic River.

In 2004, Penn joined the Academy of Motion Picture Arts and Sciences. His next film was the adaptation of Robert Penn Warren’s novel All the King’s Men. The film turned out to be a critical and commercial failure. Penn received positive reviews for his role in the biopic Milk. The film earned him the Academy Award for Best Actor. His latest films have been the Fair Game in 2010 and The Gunman in 2015.

Penn’s directorial debut was the 1991 film The Indian Runner. The drama was based on the song by Bruce Springsteen “Highway Patrolman.” Sean Penn also began to direct several music videos. When Penn took a hiatus from acting, he began working on several films. One of his most successful directed films was the thriller The Crossing Guard in 1995. He was also the director of the highly successful survival film Into the Wild in 2007. His latest work as the 2016 film The Last Face.

In 1984, Sean Penn got engaged to actress Elizabeth McGovern. However, they broke up. In 1995, he met the pop singer Madonna and married on August the same year. Madonna and Penn starred together in the 1986 film Shanghai Surprise. She dedicated her album True Blue to Penn. However, in 1987, Madonna filed for divorce. The marriage was terminated in 1989.

Before his marriage to Madonna was finalized, Penn moved in with his girlfriend, Robin Wright. They had their first child Dylan Frances in 1991. Two years later, their second child Hopper Jack was born. The couple separated in 1995. Penn began dating the artist Jewel and followed on her tour. In 1996, Penn and Wright got back together until 2007, when they filed for a divorce. However, they reconciled and continued to live together until 2009, when he filed for a divorce. The divorce was finalized in 2010. In 2007, he began dating actress Charlize Theron and got engaged in 2014. However, they ended the relationship in 2015.

Throughout his career, Penn has been outspoken about several political causes. In 2002, he advertised on the Washington Post asking President George W. Bush to end violence. He criticized Bush administration and even briefly visited Iraq. His actions led to Penn developing a good relationship with the president of Venezuela Hugo Chavez.
In 2005, Penn took an active role in rescue works after Hurricane Katrina. In 2010, after the Haiti earthquake, Penn founded his J/P Haitian Relief Organization. The organization ran a 55 000 person tent camp. For his efforts, Penn was designated the Ambassador-at-Large for Haiti position. In 2009, after receiving his Academy Award for the movie Milk, Penn openly supported gay marriage.