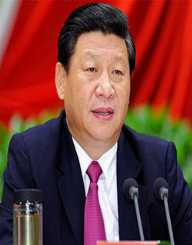 General Secretary of the Communist Party in China Xi Jinping was born on June 15, 1953, in Beijing. After founding the Communist state of China, Xi’s father held several important posts, like propaganda chief and vice-premier of the National People’s Congress. When Xi was ten years old, his father was thrown out from the Party and sent to work in Luoyang factory.

Xi started his education, but the 1966 cultural revolution halted it. His father was jailed in 1968. After this, Xi was sent to work in Yanchuan County in Mao Zedong’s Down to the Countryside Movement. With time, he became the branch secretary of the production team but left his post in 1975. He went to study chemical engineering at the prestigious Tsinghua University. The students had to spend one-fifth of their time learning Marxism-Leninism thought and do farm work. After finishing studies, he served as a secretary for Geng Biao, the secretary-general of the Central Military Commission, which gained him military background. Eventually, Xi obtained a Doctor of Law degree.

In 2002 Xi was named the party chief in Zhejiang, which was the top provincial office of his career. He ascended to the national stage in 2002 when he was elected a full member of the 16th Central Committee. In 2007, Xi transferred to Shanghai and became the party chief. He was highly regarded by the leadership of China and tried to avoid controversy. Until this period in his career Xi had avoided scandals and serious opposition.

In 2007, at the 17th Party Congress, Xi was appointed to the nine-man Politburo Standing Committee, which suggested that he might become the next leader of China. The following year, he was elected as the Vice-President of the People’s Republic of China.

In 2012, Xi Jinping was elected to be the General Secretary of the Communist Party, making him the leader of the country. He was elected the President of the People’s Republic of China the following year.

As President, Xi announced some reforms. One of these was the comprehensive deepening reform, which would reduce the bloated state sector and restructure state-owned enterprises. He also abolished the re-education through labor system, which had received a lot of criticism in human rights sector. Xi also shifted from one to a two-child policy.

From his day of the election, Xi has started to fight corruption. He outlined an eight-point guide, listing the rules to curb corruption during official party business. Xi also formed the centrally-dispatched inspection teams to gain more understanding of the provincial and local party organization work. During his anti-corruption campaign, several high-level politicians have been implicated and dismissed. However, Xi has been criticized to attach mainly his political opponents.

As the President, he has made several foreign visits, the first being to Russia. He has also met with the former U.S. President Barack Obama ad the Queen Elizabeth II.

Xi and other Communist Party ideologues have made plans for China, describing them as the Chinese dream. The word dream has also been meant to mean the great revival of the Chinese nation. Xi’s policies are mostly economically liberal, but from the political point of view, they are mostly conservative. One of the policies Xi has implemented, is to reduce the Western influence and limit access to various internet sites. He has also severely influenced school curriculums.

In the 1980’s, Xi married KeLingling, who was the daughter of Britain’s ambassador. The couple divorced after a few years. In 1987, Xi married Peng Liyuan, who was a prominent folk singer in China. Since their professional lives were so different, they spent a lot of time apart. Xi and Peng have a daughter Xin Mingze. She studies at Harvard University under a different name.

In 2012, Bloomberg website was blocked in China, after the appearance of an article that several of Xi’s family members might have substantial business interests. There was no evidence to prove that Xi is helping them in any way. The New York Times reported that Xi’s family members sold their corporate and real estate investments, mainly to decrease Xi’s political vulnerability.

Many of high position Chinese officials were named in the Panama papers. These included seven leaders from the Politburo of the Communist Party of China and Deng Jiagui- Xi’s brother-in-law. He had companies in the British Virgin Islands.