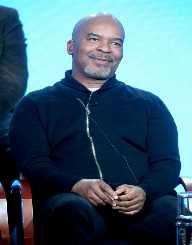 David Alan Grier was born on June 30, 1956, in Detroit, Michigan, USA. His parents are Aretas (Dudley) and  William Grier. He also had two siblings.

As a young adult, David Alan Grier attended and graduated from the University of Michigan, where he earned a bachelor’s degree. However, he did not do this in four years, as he left school for a short time to act in New York. He later returned to complete his degree.

He then went on to attend the Yale School of Drama, where he earned his MFA in 1981.

While in college, David Alan Grier was a part of many plays. However, it wasn’t until 1981 that he acted in his first Broadway play, The First. Later in this same year, he also acted in Dreamgirls. Two years later, he was in an off-Broadway production of King Richard III.

David Alan Grier began his film acting career a couple of years after he worked on Broadway, in 1983. The first film he was in was Streamers. The next year, he also a had small role in the film A Soldier’s Story. In 1985, Grier began acting in television shows as well. He started off with a one-time role on The Equalizer before he earned a repeat role on All if Forgiven in 1986; this was his first long-term television role. After this role, he didn’t have another major television role until the late 1990’s. In the meantime, David Alan Grier continued to take one small television and film roles. Some of the other shows and films he worked on during this decade include Tour of Duty, Off Limits, Tanner ‘88, and Baby Boom.

For most of the 1990’s, David Alan Grier continued to act in small roles in films and television shows. Some of his early works from this decade include The Player, In the Army Now, Tales from the Hood, The Preston Episodes, and Jumanji. In 1998, he earned a repeat role on the show Damon, which he acted in for a season. However, one of the most popular things he acted in was a skit comedy show called In Living Color. He first began acting in this show in 1990, playing various characters. He continued to act in this show for over a decade (and over 100 episodes) until 2001.

In 2000, David Alan Grier earned another recurring role, this time as Jerome Daggett on DAG. He stayed with this show until 2001. For much of the early 2000’s, he went back to having small parts in television shows and films. He even had many voice acting roles, like in The Proud Family and Samurai Jack. While he did have many small roles, he also took on various projects where he acted in repeat roles. He had major repeat roles on both Life with Bonnie and Crank Yankers, both beginning in 2002. Some of the films he had small roles in include Bewitches, The Hustle, An American Carol, and Astro Boy.

In the 2010’s, David Alan Grier continued his pattern of acting in mostly small roles in shows and films but also taking on repeating roles in television shows. Some of the shows he had repeat roles in most recently including Bad Teacher, Comedy Bang! Bang! And The Carmichael Show. Other shows and films he acted in most recently include Bones, The Soul Man, Peeples, Black Dynamite, and The Big Sick.

David Alan Grier has one published autobiography, which was released in 2009: Barack Like Me: The Chocolate Covered Truth. This book detailed both Grier’s professional acting career, his personal life, and the struggles of an African American man trying to make his way in life.

All of Grier’s awards and accomplishments are due to his long acting career. Some of his most impressive awards are listed below.

David Alan Grier was first married to Maritza Rivera. Sadly, this couple divorced in 1995. He later remarried to Christine Kim. Together, this couple had one child: Louisa Grier-Kim. This marriage ended in divorce in 2009.