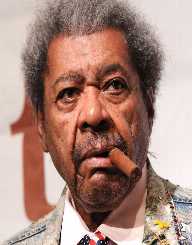 Don King is a former promoter who made a lot of fame & fortune by promoting boxers and fights. He is infamous for his antics which range from featuring a weird look with an out-of-this-world kind of hairstyle and brash manners to serious crime and jail time.

Don King has been arrested more than 35 times in his life. Regardless of that, he did work with some of the most famous and successful boxers of the 21st century including Mohammad Ali, Mike Tyson, Evander Holyfield and Roy Jones Junior. Although, many of these boxers later claimed that King committed fraud with them.

Don King was born on August 20, 1931, in Cleveland, Ohio. His star sign is Leo, and his full name is Donald DonaldKing. His parents were Clarence King and Hattie. Donald had a rocky childhood where he got into trouble on several occasions and broke the law frequently. Don King was eventually jailed on charges of manslaughter. He was accused of killing two men but was later granted a pardon.

Don King didn’t pay much attention to education and dropped out of the Kent State University very early. Don King followed the path of crime and began illegal bookmarking. However, he soon got a chance to choose a different career path which would bring him into a lot of limelight and get him a lot of money.

Don King’s debut was legendary. He was promoting the historic match with George Foreman, the then champion. The event was titled Rumble in the Jungle and went on to become a classic marked in history forever. The year was 1974. Don King then promoted Thrilla in Manilla with Ali fighting Joe Frazier. This event was also a huge success and King made a lot of fortune out of this. He started working with several other boxers, and his fame and money both continued to increase.

The first bells of controversy rang when in 1982, Ali sued Don King for fraud. Ali claimed that King had mishandled his funds and had been underpaying his money. The dispute was eventually settled with a payment of $50,000 from King to Ali. Two years later, King promoted & managed the Victory Tour of Michael Jackson – the pop star. Another boxer, Larry Holmes sued King for mishandling of funds again. King settled the dispute by paying Holmes $150,000. By this time, rumors of his links with organized crime had caught fire, and he was summoned.

Four years later, he ran into controversy again. This time, boxer Terry Wayne sued him and successfully extracted $7.5 million from King for a settlement outside of court. This didn’t end here, however. Boxer Tim Witherspoon also challenged and settled for $1 million to drop all cases against King. The biggest blow came from Mike Tyson. He sued King for $100 million for laundering his money. They arrived at a settlement of $14 million. King’s habit of mishandling the money has continued even still, apparently.

Boxer Chris Byrd sued Don King in 2006. No doubt boxing promotion has made him very rich, but it has also brought him lots of controversies and disputes. Don King recently found himself in controversy again by using the word nigger when introducing US President Donald Trump.

Don King married in 1959, at 28 years of age. His wife was a woman named Henrietta. They had three children – a daughter Debbie(their biological child) and two sons Carl & Eric (both adopted). Henrietta died in 2010. He has five grandchildren.