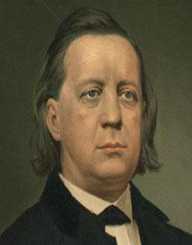 American clergymen of Protestant belief, public speaker and social reformer Henry Ward Beecher was born on June 24, 1813, in Litchfield, Connecticut, United States of America. Born eighth among the thirteen children of his parents, father Lyman Beecher, a distinguished Presbyterian preacher, and Calvinist minister formerly from Boston and mother Roxana Foote. His mother went to her heavenly abode when Henry was only three years old. There are many distinguished personalities and characters among his 12 siblings including older sister Harriet Beecher Stowe, best-known for writing the antislavery novel ‘Uncle Tom’s Cabin.’

Henry Ward Beecher had to face some speech difficulties during his growing up years which was duly corrected while studying at the Mount Pleasant Classical Institute in Massachusetts. He attended Amherst College after that and graduated from there in 1834. His rhetorical skill was enhanced after his stint at the Mount Pleasant Classical Institute, and he gradually became a confident and emphatic orator.

He joined the ministry following the footsteps of his father and older brothers and got himself admitted in the Lane Theological Seminary situated in Cincinnati, Ohio, where his father was the President since 1832. He received his divinity degree from the seminary in 1837.

Henry Ward Beecher became a minister of the First Presbyterian Church in Lawrenceburg, Indiana in 1837. He soon attracted the attention of the nation by his staunch support and adherence to the New School Presbyterianism which was in severe disagreement with the Old School Presbyterianism on the issue of original sin and abolition of slavery. The Western Presbyterian Church was split into two halves due to this conflict, and his Lawrenceburg Church retained him as their pastor breaking off from its original parent body.

However, following the ‘Panic of 1837,’ Henry Ward Beecher was subjected to abject poverty which caused him to accept an offer by Banker Samuel Merrill to head the Second Presbyterian Church in Indianapolis in 1839. His tenure in Indianapolis was a highly successful one. His reputation as a new age preacher increased abundantly during this time which also saw the second Presbyterian Church become the largest church in the city.

Soon, he became the face of the anti-slavery campaign among the clergymen of the United States and regularly enthralled his audiences with his captivating and motivational speeches. However, his precarious financial position again led him to seek a new job and in 1847, he accepted the offer of businessman Henry Bowen and was ordained as a minister of the newly founded Plymouth Congregational Church in Brooklyn, New York.

Henry Ward Beecher was a reformer in his approach and often stood against the authoritarian practices of strict Calvinism which the generation of his father used to preach. He tried to instill his theory of ‘Gospel of Love’ and ‘Forgiveness of Sin’ in the minds of the people instead of the theory of ‘Fear of God and his punishment.’

He even denied the existence of hell to propagate his Gospel of love. His stature as an emphatic public speaker continued to grow as he started touring the country in a lecture circuit. Soon, he became one of the most sought after and popular speakers of the country with a quantum leap in his fees.

Henry Ward Beecher fought relentlessly for the abolition of slavery. He was also a prominent leader of the women's suffrage movement. His unwavering support and advocacy for the temperance movement went throughout his career. He was elected as the first President of the American Woman Suffrage Association in 1869 after unsuccessfully campaigning to become a representative of the New York Constitutional Convention of 1867-1868.

In 1870, Henry was entangled in an extra-marital scandalous affair. Theodore Tilton, one of the devotees of his church accused him of having an illicit relationship with his wife Elizabeth Tilton who confessed to the charges of adultery only to be withdrawn several times during the trial. The trial continued for about six months and came out with a hung verdict.

Henry Ward Beecher married Eunice White Bullard in 1837 after having met her during his Amherst College days. The couple together had eight children from their marriage. However, only four of them survived to saw their adulthood. Their marriage life was not a happy one as both were accused of neglect and nagging which was also complicated and compounded by Henry’s prolonged absence from home and his proximity to many women.

He went for his heavenly abode on March 8, 1887, in his sleep after having suffered a heart attack. His mortal remains were entombed at Green-Wood Cemetery in New York.