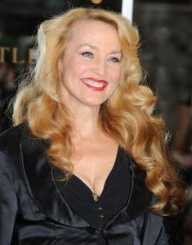 Jerry Faye Hall was born on July 2, 1956, in Gonzales, Texas. Her mother Marjorie was a medical records librarian, and her father John was a truck driver. Hall was raised in Mesquite, a suburb of Dallas, Texas. She attended and graduated from North Mesquite High School. During her time in high school, Hall also attended Kim Dawson Modeling Agency. Her twin sister Terry is a real estate broker.

Hall began working as a model, and at one point moved to France on her own, without a modeling contract. She got money for this venture from her insurance, after a car accident.

Hall went to live in the French Riviera and very soon, got lucky with her career. While at a hostel, she was discovered by fashion agent Claude Haddad while she was sunbathing on a Saint Tropez beach. After being discovered, she moved to Paris, where she shared an apartment with singer Grace Jones and Jessica Lange, who both were modeling at the time. She immersed in the Paris nightlife and soon began living together with fashion illustrator Antonio Lopez. In 1975, Hall appeared on the cover of Roxy Music album Siren disguised as a mermaid. She began a relationship with the group’s lead singer Bryan Ferry, who proposed to her. Later, Hall appeared on his promotional film for the hit “Let’s Stick Together.”

From there on, Hall’s career picked up very fast. By 1977, Hall had appeared on 40 magazine covers, including prominent magazines like Vogue and Cosmopolitan. She was earning modeling fees of $1000 per day at the time. The same year, Hall met the lead singer of Rolling Stones, Mick Jagger and left Bryan Ferry for him. In the beginning, the two were often seen together in New York in several high profile clubs of the time, like Studio 54 and 21 Club. Jagger wrote the song “Miss You” for her. In 1988, Ferry wrote the song “Kiss and Tell” dedicated to Hall. When Hall began the relationship with Jagger, he was married to Bianca Jagger, who began divorce process due to her husband’s infidelity. With her major earnings, Hall bought an 8.1 square kilometer ranch in Lone Oak, Texas.

Hall’s first film appearance was in a small role in the 1980 film Urban Cowboy. Her first major project was in a supporting role in the 1989 Tim Burton’s Batman. In 1990, Hall appeared on London West End, debuting on stage in the revival of Bus Stop as Cherie. The same year, she also joined Roger Water’s massive performance of The Wall in Berlin. In 1993, Hall was cast in the British television show Cluedo, and in the series The Detectives.

In 2000, Hall appeared on Broadway production of The Graduate as Mrs. Robinson. In the role, she was required to appear nude on the stage. The following year, Hall made an appearance in the documentary film Being Mick as herself. In 2005, Hall started reality series on VH1 titled Kept. The series revolved around her search for a boytoy- the 12 contestants were asked to transform from boys to refined gentlemen.

In 2005, Hall once again appeared on the West End stage in the production of Cole Porter’s High Society, where she played Mother Lord. She also provided a voice for Sister Penelope in the cartoon Popetown. In 2007, Hall starred in the British show Hotel Babylon and appeared in the BBC comedy series French and Saunders.

In 2010, Hall published her autobiography Jerry Hall: My Life in Pictures. In 2012, it was announced that Hall would contest in the show Strictly Come Dancing with her dancing partner Anton du Beke.

Hall and Mick Jagger began dating in 1977 and got married in 1990 in Bali, Indonesia. However, the marriage was later declared invalid by the High Court of England and Wales. The couple had four children together- Elizabeth Scarlett, James Leroy, Georgia May and Gabriel Luke. They lived together in Downe House, Richmond Hill, London. The couple split in 1999, due to Jagger’s infidelity.

In 2015, Hall began dating business magnate Rupert Murdoch. They announced their engagement in The Times magazine in January 2016 and married in March.