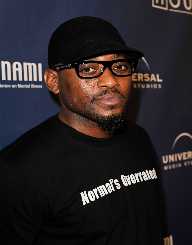 Omar Hashim Epps was born 20th July 1973, in Brooklyn, New York, United States. Epps was raised by his mother after his parents divorced when he was young.

Omar Epps showed his creativity from an early age, writing poetry, songs and short stories at the age of ten. He did his studies at the Fiorello H. LaGuardia High School of Music & Art and Performing Arts.

Omar Epps has regularly acted in movies since 1992. Although he appeared in a short film in 1988, his movie career started in 1992, with his debut in Juice – a movie about four young men growing up in Harlem.

Omar Epps was also well-known for his television acting. Between 1996 and 1997, he played the role of Dr. Dennis Gant on the hugely popular drama, ER over several episodes.

Another major television role for Epps came in 2004 when he was cast as Dr. Eric Foreman in the television series, House. He held the role for eight years, until 2012.

Omar Epps also recorded an album in 2004 called Omar Epps Presents; The Get Back. As well as being an actor, Epps was known for his songwriting, rapping, and record producing skills.

Omar Epps was nominated for many awards and won several.

He was awarded the Silver Nymph Award for Best Actor at the Festival de Television de Monte Carlo in 1996, and he also won the NAACP Image Award for Outstanding Supporting Actor in a Drama Series for his role in House, in 2007, 2008 and 2013.

Omar Epps began dating Keisha Spivey in 1999. She was a singer and was in a hip-hop group called Total at the time. The couple married in 2006, and they have two children and a third child from a previous relationship Epps had.