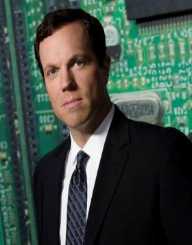 Adam Baldwin is a TV actor.  His career started early in his life and had continued ever since.

Adam Baldwin attended New Trier High School. A director discovered him while he was there.

His first role in a movie came quickly. He was cast as Ricky Linderman in the 1980 film My Bodyguard.

The 1980s were filled with roles in movies and television. Adam Baldwin was in Ordinary People,  D.C. Cab and Reckless, but his next prominent role came in 1987. In Stanley Kubrick's Full Metal Jacket, he played the sergeant Animal Mother. His tall build and deep voice have scored his many roles as law enforcers and military officers. This is true for his movie roles in Predator 2, Independence Day, and The Patriot.

Adam Baldwin continued with many other roles in the 1990s, but he also had many recurring characters in television series such as The X-Files, Angel, Firefly, and its spin-off Serenity. He has had significant roles in other series such as The Cape, Chuck, and The Last Ship. He has taken on numerous roles as a voice actor. He had roles on animated television shows such as Men in Black: The Series and Jackie Chan Adventures.

Adam Baldwin has also lent his voice in video games such as Kill.switch or as Superman in Superman/Doomsday and DC Universe Online.

Adam Baldwin is support of Ride 2 Recovery. It is an organization that helps the rehabilitation of wounded veterans through bike riding.

Adam Baldwin is an avid sports fan. Not only does his play frisbee, baseball, and bowling, but he remains active in sports such as golf. From time to time he will play in celebrity hockey games.