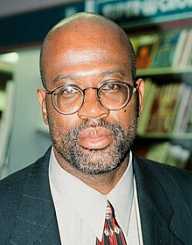 Christopher Darden is a US practicing attorney and television actor. He became a global figure during the O.J. Simpson murder trial.

He was born as Christopher Allen Darden in Richmond, California on April 7, 1956. He was part of the eight children born into the family. His parents Richard and Jean Darden were low-income earners. Darden grew up in a financially struggling family in San Francisco. Darden committed petty stealing escapades to sustain his basic and schooling needs.

He went to John F. Kennedy High School and graduated in 1974. He joined the San Jose State University for his college degree. As a degree student, Darden became an active participant in sports and student politics. He joined the African American student society, Alpha Phi Alpha. In 1977 Darden graduated with a Bachelor of Science degree majoring in Criminal Justice Administration. He studied at the University of California in Hastings for his law degree. In 1980 Darden graduated with a degree in his legal studies.

Soon after graduating from college, Darden got his legal practicing license in 1980. Darden got employed at the Los Angeles office of the National Labor Relations Board. He resigned from the office and became part of the Los Angeles District Attorney team. Darden worked in different locations before settling in the Criminal Courts Building in 1983.

In his first decade at the prosecuting office, Darden successfully prosecuted 19 murder trials in Los Angeles. Darden was vicious in the investigations and within the courtroom. He became one of the rising stars in the Los Angeles District Attorney’s department.

In June 1994 Nicole Simpson Brown and Ron Goldman were killed in Los Angeles. Police suspected Nicole’s husband O.J. Simpson as their lead suspect. Simpson tried to avoid arrest by fleeing in his car driven by a longtime friend Al Cowlings. Eventually, the two got arrested and tried.

Darden got tasked to investigate the criminal role of Al Cowlings in relation to the twin murders. The Al Cowlings case crumbled for lack of circumstantial evidence to prove criminal intent. Marcia Clark took up the O.J. Simpson prosecution assisted by Bill Hodgman. Hodgman experienced stress breakdown during the rigorous proceedings of the case. Darden was assigned to replace him as the assistant prosecutor. He engaged in a courtroom battle against his longtime friend and a working associate during the police brutality investigations, Johnnie Cochran. Cochran was head of the team that provided Darden with files of police brutality.

In a case that spilled into the American households, Darden was accused of being insensitive to the black community. Cochran pulled in the race agenda, claiming Simpson was a victim of a racially induced trial. Cochran also claimed that Darden became part of the prosecution to veil the original racial intent of the prosecution.

In the courtroom, the prosecution led by Clark and Darden faltered in their evidence. The defense team managed to prove to the jury that their client Simpson was a victim of racial prejudice. On October 3, 1995, the jury found fault with the prosecution evidence. They predominantly black jury found the accused not guilty of all the counts against him in court.

After the courtroom debacle, Darden resigned from the District attorney’s office for lecturing at the California State University. He also taught at the Southwestern University School of Law. He specialized in the criminal procedure, legal investigations and trial advocacy.

He featured in numerous television stations as an expert in legal discussions. Some of the media houses that he has featured in include CNBC, CNN Court TV, and NBC.

Darden tried his hand in acting. He starred in television episodes of various series. Notable appearances include casting in Touched by an Angel, The Tonight Show with Jay Leno, and Muppets Tonight. He also starred in the films Hot Summer Night and the legal production Power of Attorney.

As a practitioner and scholar, Darden wrote and published several editions of his time in the legal profession. He published crime-related novels. Some of the publications include the 1999 novel Nikki Hill, and the 2002 book The Last Defense.

In 1999 Darden resigned from lecturing at law school to establish his own law firm in Los Angeles. He is married to Marcia Carter and has five children. Darden still lives smith family in Los Angeles.