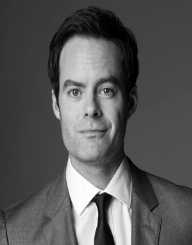 Bill Hader is an American comedian, actor, and producer, best known for his work on Saturday Night Live.

William Thomas Hader Jr. was born in the city of Tulsa, Oklahoma, on June 7, 1978. His mother, Sherri, was a dance teacher. His father, William, was a truck driver who occasionally performed stand-up comedy. He has two sisters named Katie and Kara. He started his education at the Patrick Henry Elementary School. He continued at the Thomas Edison and Cascia Hall Preparatory Schools. He enrolled at the Art Institute of Phoenix. He then transferred to the community college in Scottsdale.

During high school, Hader created several films with his friends. After dropping out of college, he moved to Hollywood. He worked as a production assistant on sets for different films and television shows. He soon got a job as an assistant editor for the cooking show Iron Chef America.

Hader started attending classes for improvisational comedy. Together with three of his friends, he formed a comedy group called Animals from the Future. They performed in front of small audiences. Actress Megan Mullally was in the small crowd one evening. She was very impressed by Hader. So, she recommended him to the creator of Saturday Night Live, Lorne Michaels.

Hader went to New York City and attended the audition for SNL. He managed to get the job. His first appearance on the show was on October 1, 2005. He was regularly cast in the sketches. He mostly did impressions, including those of famous people like Julian Assange, Al Pacino, and Charlie Sheen. He admitted to struggling with anxiety during his performances. He still managed to receive great praise. He left the show in 2013, because of family obligations. He appeared as a guest host two more times, in 2014 and in 2018.

Hader has had small roles on numerous films. He has mostly starred in comedies, such as Superbad, Forgetting Sarah Marshall, Pineapple Express, Year One, and many others. In 2015, he had his first leading-man role in the romantic comedy Trainwreck. He has also had small appearances in television shows, such as The Mindy Project and Brooklyn Nine-Nine. In 2018, he produced, directed, and starred in the dark comedy series Barry, aired on HBO. He played the role of a contract killer who joins the art scene in Los Angeles.

Since 2009, Hader has served as a producer and consultant for the popular animated sitcom South Park. He has also voiced characters in many animated productions. His work includes voiceovers in Ice Age, Star Trek Into Darkness, Inside Out, Grand Theft Auto, and many others.

In 2009, Hader was part of the team that won the Emmy Award for Outstanding Animated Program for South Park. He has received several Emmy Nominations for Outstanding Actor in a Comedy Series, mostly for his work on Saturday Night Live. He has also been nominated for Outstanding Comedy, Writing, and Directing for his show Barry.

In 2006, Hader married Maggie Carey, a screenwriter, and director. They have three daughters – Hannah, Harper, and Hayley. They ended their marriage in 2018.