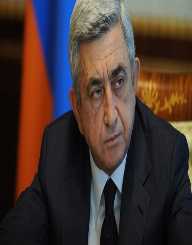 Serzh Sargsyan was born on June 30th, 1954. He is famous for being the incumbent president of Armenia. He is the third president to take charge of the office in Armenia. He took over as the president in 2008 after winning the elections with the Republican Party of Armenia. He is also the current chairman of the party that gave him the ticket to the most coveted seat in his nation. In February 2013, he was re-elected for his second term as the President.

Serzh Sargsyan was born on June 30th, in 1954. His place of birth was in Stepanakert in Armenia. In 1971, he enrolled at Yerevan State University. Around the same time, he was called to serve in Soviet Armed Forces and later resumed his studies in 1972. In 1979, he graduated from the institution with a degree in philology.

Upon completing his studies, Serzh Sargsyan immediately ventured into politics. He took his first assignment as the head of Stepanakert City Communist Party Youth Association Committee. Politically, things were bright for him during his first 11 years in the field. During this period, he received several appointments for the party. Some included acting as the First Secretary and Second Secretary. Additionally, he was also appointed the Division Head of Stepanakert City Committee Propaganda. Further on, he also served as the unit instructor to Nagorno-Karabakh Regional Committee Communist Organizations.

As time went by, Sargsyan also rose up his political ranks. In 1990, for example, he was appointed to chair the Nagorno-Karabakh Republic Self-Defence Forces Committee. This was followed closely by his membership into the Senior Council. His contributions while being a member here were recognized as he played a huge part in organizing Armenian armed forces during the Nagorno-Karabakh War.

Shortly, in 1993, Sargsyan got his appointment as the Minister of Defense. Two years later, he was given a different role as Head of the State Security Department for a period of one year, i.e., 1995 to 1996. He also served as the Minister of National Security around this period.

In 1999, Sargsyan got close to Robert Kocharyan, former Armenian president while he worked as the Chief Of Staff for a year. Since taking over as the Chief Of Staff, he was offered prestigious roles such as National Security Council’s secretary, the Defense Minister and later appointed as the Prime Minister. The sudden death of then gave his appointment to serve as the Prime Minister a lift Prime Minster called Andranik Margaryan.

In 2008, Serzh Sargsyan received strong backing from President Robert Kocharyan. This made him a strong candidate that would take over as the next president of Armenia. Elections were held in February where he emerged victorious bagging home 53% of the total votes. He had defeated his strong rival Levon Ter-Petrossian.

Following his triumph in the 2008 elections, Serzh Sargsyan was sworn into office two months later on April 9th, 2008. Notable changes were experienced when Sargsyan took charge over as the third Armenian president. For instance, freedom of speech was upheld by his government. Similarly, his government also fought to promote the growth and accessibility of the internet. Sustainability was obtained as a result since there were more than 10, 000 bloggers by 2011.

On the international arena, Sargsyan expressed sincere concerns over global issues, e.g., a war that was still affecting Armenia and other nations. He expressed his views in 2008 during the United Nations General Assembly he attended in New York. He also strived to bring in peace with Turkey and Azerbaijan.

Regardless of his struggles to bring change to his nation, the country’s economy was greatly affected. The Great Recession further worsened this. As a result, the World Bank ranked his nation as the 6th worst in terms of their GDP growth.

Following his honest efforts in shaping Armenia, Serzh Sargsyan was re-elected into office during the 2013 general elections.

In 1983, Serzh Sargsyan wedded Rita Aleksandri Dadayan, a music teacher. They are blessed with two daughters. They are also grandparents to Mariam.