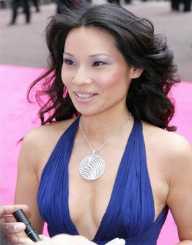 Lucy Alexis Liu is an American actress. She is well known for her participation in several movies, and she is also a voice actress, director, producer, singer and an artist. She was born on December 2, 1968, in New York as Lucy Liu. During high school, she got herself a middle name – Alexis, therefore becoming Lucy Alexis Liu. Her parents are both from China but met in New York, where they settled and became a family. Lucy Alexis Liu is the youngest child in her family, and she has two siblings.

Lucy Liu grew up in what she herself describes as a “diverse neighborhood”. She began studying English at the age of 5 and was a fan of martial arts during her childhood. She was particularly interested in Kali-Eskrima-Silat (knife-and-stick fighting) martial art. After graduating high school in 1986, she started studies in New York University. Later Liu transferred to Michigan, there she continued her studies in the University of Michigan. She has graduated with a bachelor’s degree in Asian language in cultures.

Lucy Alexis Liu started her career when she was 21 years old. She was driving a subway and was noticed by an agent, who then invited her to do one commercial. During her studies in Michigan, she participated in a theater group and got a part in “Alice in Wonderland” when she was a senior student in 1989. Initially, she applied for a supporting part, but she ended up doing a lead role. After this experience, she has participated in several smaller films and musicals. It was when she got a leading role in “Ally McBeal”, that she became widely known as an actress. Her character was designed specifically for Liu, as she initially auditioned for a different role. Interestingly, in the beginning, she was supposed to do only a temporary part, but she was doing so well, that she became a permanent cast member later on. For this role, Liu won a Primetime Emmy Award.

One of the major works Liu participated in was “Charlie’s Angels” in 2000. She played in this movie together with highly recognized actresses Drew Barrymore and Cameron Diaz. In this movie, Liu had a role of Alex Munday. This movie made a profit of over $264 million. It also had a sequel in 2003, which also did extremely good both review-wise and financially. The sequel made a profit of over $259 million.

Kill Bill And Other Movies

Liu appeared in the movie “Kill Bill”, a movie by Quentin Tarantino in 2003. Her role in this movie earned Liu a MTV Award for the Best Movie Villain. Liu has participated in several movies and TV shows together with other stars: Antonio Banderas, Jay-Z, Matt LeBlanc, Keira Knightley and others. She also appeared on animated movies like Futurama and The Simpsons, and as the voice of Viper in the Kung Fu Panda series.

In 2007 Liu played a part in a movie “Rise”. This movie got Liu into the list of Top 50 Sexiest Vampires. The British film magazine “Empire” listed Liu as 96 of the 100 Sexiest Movie Stars list in 2007. One of the very popular recent appearances of Liu is in the show “Elementary”. This show is a remake of the classic works of Sir Arthur Conan Doyle about an investigator Sherlock Holmes. Highly unusual is the role that Liu was selected for – she is playing Dr. Joan Watson. This role has never before been played by a female actress.

Career As A Visual Artist

Liu has a great talent as an artist. She has been doing collage mixed media, painting, photography since the age of 16. Previously she signed her artwork as Yu Ling, which is actually her Chinese name. She used it as a pseudonym. Her work is shown in several galleries. Her artist career is not only a hobby, from 2004 to 2006 she also attended a school for drawing, painting, and sculpture in New York. Her artwork has been shown in several shows both in USA and Europe, and she is donating a share of the income to UNICEF. One of her most popular works called “Escape”, an abstract painting, was presented in Art Basel Miami in 2008 as one of the top contemporary American artist paintings.

Liu is very active in the field of charity. One of her topics of interest is breast cancer, as she has herself undergone surgery for a lump in a breast in 2001. It turned out benign, but it motivated her to invest into breast cancer research and education. She was also a face of UNICEF and has traveled to several Middle Eastern and African countries for charity events.

In 2011 Lucy Liu was actively taking part in a Human Rights Campaign. This campaign was supporting marriage equality for homosexual people. She also participates in an awareness campaign for iron deficiency anemia and malnutrition in children from third world countries.

Lucy Liu has a deep interest in spiritual topics and has done extensive research in fields of Buddhism, Taoism, Kabbalah. She can speak 6 languages.

She is not married. Her son was born in August 2015, he was delivered via a gestational surrogate.