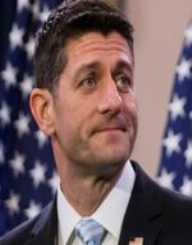 Paul Davis Ryan Jr. is an American politician and Republican representative for Wisconsin Congressional District 1. He has been serving in that capacity since 1999.  Born on January 29, 1970, Paul Davis Ryan Jr. is currently the speaker of the United States House of Representatives since 2015 replacing John Boehner. This makes him the youngest speaker in the US since James G. Blaine in 1985. He is also the first person from Wisconsin to hold the office. From 2011 to 2015, he was the chair of the House of Budget Committee.

He also served as thechair of the House Ways and Means Committee in 2015. Paul Ryan was the running mate for the Republican nominee Mitt Romney during the 2012 US presidential election. They lost to President Barrack Obama. He is regarded as the fiscal representative for the Republicans and negotiated the Bipartisan Budget Act of 2013 along with Democratic Party Senator Patty Murray.

Paul Davis Ryan Jr. was born on January 29, 1970, to Elizabeth "Betty" Ann and Paul Davis Ryan. Elizabeth was an an interior decorator and Paul, a lawyer. He is the youngest child of his parents with his siblings being Janet, and two brothers, Tobin and Stan. Ryan started his education at the St. Mary’s Catholic School in Janesville. He continued at the Joseph A. Craig High School, Janesville. During his second year, he picked a job as griller at McDonald’s. He father died of a heart attack when he was 16 years.

After graduation, he enrolled at the Miami University in Ohio, graduating with a bachelor degree in economics and politics in 1992. While there, he gained interest in reading works of Friedrich Hayek, Milton Friedman, Ludwig von Mises and Ayn Rand. He often had discussions on their worksProfessor Richard Hart. Upon the advice of Hart, Ryan had his internship in the D.C office of US Senator Bob Kasten. Ryan was a member of the Delta Tau Delta fraternity.

Paul Davis Ryan Jr. worked as a legislative aide for Senator Bob Kasten after his graduating from the university. He also picked jobs like a fitness trainer and waiter to supplement his income. Paul Ryan worked for Empower America (now FreedomWorks) as a speechwriter after Kasten lost power after the 1992 election. He later worked as a speechwriter for Jack Kemp, the Republican vice presidential candidate for the 1996 presidential election.

He also worked as the legislative director for Congressman Sam Brownback of Kansas in 1995. In 1997, he worked for a family owned, Ryan Incorporated Central as a marketing consultant.

Paul Davis Ryan Jr. defeated Democrats candidate Lydia Spottswood to become Wisconsin's District 1 Congressional Representative in 1998. This made him the second-youngest member of the House. He has since retained the seat undefeated. In 2007, she was a ranking member of the House Budget Committee. He served on the bipartisan National Commission on Fiscal Responsibility and Reform in 2010. The committee was to develop viable plans to cut down deficits.

In 2011, he became the chair of the Budget Committee after the Republicans took over the House. He will remain the chair until 2015. In 2013, Ryan alongside Democrat’s Senator Patty Murphy negotiated the Bipartisan Budget Act of 2013.

Prior to the 2012 presidential elections, Republican presidential candidate Mitt Romney selected Paul Ryan as his running mate for the elections. Ryan officially accepted the position on August 11, 2012, becoming the first person from Wisconsin to run on a major party’s national ticket. At the 2012 Republican National Convention on August 29, 2012, he formally accepted his nomination. Mitt and Ryan lost the 2012 elections to Democrat’s candidate Barrack Obama and Joe Biden. Ryan, however, retained his set in the House of Representatives.

Speaker Of the House

Speaker John Boehner announcedhis resignation from office and backed Kevin McCarthy to be his successor. The Republications gave their support to McCarthy, but it later turned out that he may not have the needed support. They, therefore, turned to Paul Ryan as a viable candidate. Ryan initially declined to contest until some conditions are met. On October 22, 2015, he confirmed his participation after gaining the support of both factions of the Republican. He was elected as Speaker on October 29 receiving 236 votes. This makes him youngest speaker since 1975.

Paul Davis Ryan Jr.is married to a tax attorney, Janna Christine Little since 2000. The couple has three children Elizabeth "Liza" Anne, Charles Wilson, and Samuel Lowery. The family lives in the Courthouse Hills District of Janesville, Wisconsin. He is a Roman Catholic and a member of the St. John Vianney Catholic Church in Janesville.

Paul Davis Ryan Jr. won the Guardian of Small Business Award, National Federation of Independent Business in 2004 and 2010, Manufacturing Legislative Excellence Award of the National Association of the manufacturer, 2009, Claremont Institute’s Stewardship Award, 2011, and the Leader Award by Jack Kemp Federation in 2011.