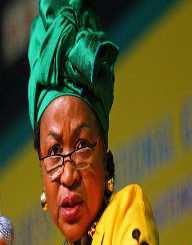 South African politician Baleka Mbete was born in Claremont, Durban, Natal on the 24 September 1949. As a preschooler, she spent time living her grandmother in the Northern Transvaal. In 1959 her family moved to Fort Hare University in the Eastern Cape. Her father had been appointed librarian at Fort Hare University which was a politically active campus. Her father was a member of the South African Communist Party, and in time, he lost his job due to his political activities.

Baleka Mbete did her high schooling at the Inanda Seminary boarding school, matriculating in 1967. She then studied at Lovedale Teachers College and qualified as a teacher in 1973.

Baleka Mbete began her teaching career in Durban but got drawn into political activities which resulted in her having to flee the country in 1976. The banned African National Congress (the ANC) helped get her out of the state to Swaziland. She found a teaching post in Mbabane, Swaziland. The following year, she moved to Tanzania where the became the first secretary of the regional women’s section of the ANC. In 1978 she married fellow activist and poet Keorapetse Kgositsile. Baleka Mbete moved to Kenya to be close to her husband in 1981 but after an attempted coup left Kenya and went to Botswana. She worked for the Medu Gaborone Arts Ensemble as the head of the writers and music units until 1985. Her next step was moving to Zimbabwe where she worked for the ANC’s women’s section in Lusaka.

In mid-1990, Baleka returned to South Africa. At the first national conference of the ANC Women’s League, she was elected secretary general (1991-1993). In 1994 Baleka Mbete was chair of the ANC parliamentary caucus, and from 1996 until 2004 she was Deputy Speaker of the National Assembly (1996-2004). In April 2004, Mbete was appointed Speaker of the National Assembly, and in 2007 she was elected the ANC’s national chairperson.

Mbete was appointed Deputy President in September 2008. She was replaced in May 2009 when President Jacob Zuma chose Motlanthe as his deputy.

She is currently Speaker of the National Assembly and Chairperson of the African National Congress.

Baleka Mbete was married to the poet Keorapetse Kgositsile for fourteen years. They divorced in 1992.