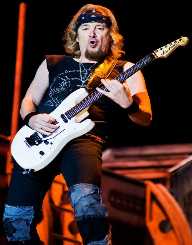 Adrian Smith is best known as a rock guitarist. He has been a member of the heavy metal band Iron Maiden.

Adrian Smith was born on February 27, 1957, in Hackney, East London, England. He grew up in the Camden area of London. His father was a painter and interior decorator. Smith is the youngest of three children. He was inspired by musicians and bands alike. Some influences included Deep Purple, Jimi Hendrix, and his childhood friend Dave Murray.

Adrian Smith left school after completing his O-levels. By then, he was already in bands by the age of 15.

Adrian Smith and Dave Murray were in some bands they started together. One band was Urchin. When Dave Murray went to sign on with Iron Maiden, Smith stayed on with Urchin. Released their song “Black Leather Fantasy” in 1977. Urchin stayed together for eight years before splitting up in 1980. Even though he already turned down Iron Maiden before, he was asked again after Urchin split up.

Adrian Smith eventually replaced Iron Maiden guitarist Dennis Stratton. Stratton was in the middle of creative differences with the band. Smith was on board when Iron Maiden recorded the band's second album Killers which had success in many countries. He was also one of the songwriters of the band. He contributed to songs such as “The Prisoner,” “Gangland,” and “22 Acacia Avenue”.  He also released “Piece of Mind” with the band in 1983.

In 1989, Iron Maiden chose to go on hiatus for a while. Smith remained active in music as he started the band ASAP. The band's full name was “Adrian Smith and Project.”  While the group released an album called “Silver and Gold,”

Adrian Smith did not achieve the same amount of success as he did with Iron Maiden. That same year, Iron Maiden was in pre-production of their eighth album “No Prayer for the Dying.” Smith walked out of the band because of creative differences. He reconciled with the group by the time they performed at Donnington Park in 1992.

Adrian Smith continued forming new bands. In the 1990s, he started Psycho Motel inspired by the progressive metal band King's X.  Psycho Motel released two albums, State of Mind and Welcome to the World. However, in 1999, Adrian Smith returned to Iron Maiden and continued to perform with them.

Adrian Smith is married to Nathalie Dufresne-Smith. The couple has three children.

Adrian Smith has said that his time away allowed him to become a better guitar player. Fans of Iron Maiden missed his contributions in his playing and his songwriting.

Adrian Smith loves to fish. He takes his bait with him on tour. He was even on the cover of Angler's Mail in 2009.