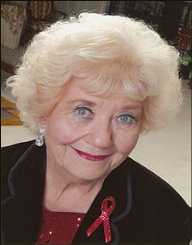 Charlotte Rae was born on April 22nd, in 1926. She became famous for being an American singer, comedian and a dancer. She enjoyed a successful career spanning for about six decades. She is best known for the role she played in the sitcom dubbed Diff'rent Strokes. The Facts of Life was also another TV series that brought her huge success. She took a recurring role here beginning 1979 and ended in 1986. In 1982, Rae was humbled with a Primetime Emmy Award nomination under the category for best actress in a comedy.

Charlotte Rae was born Charlotte Rae Lubotsky on April 22nd, 1926. Her place of birth was in Milwaukee, Wisconsin. She was the daughter of Russian Jewish immigrants namely Meyer Lubotsky and Esther. Rae had two other sisters called Beverly and Miriam.

Rae attended Shorewood High School for her early education after which she graduated in 1944. Later, she joined Northwestern University but did not manage to complete her studies. She went on to pursue her music career as she performed in different shows. Additionally, she also spent some time working on TV and radio programs. Sooner or later, she migrated to New York City during the 1940s with the primary intention of advancing her music career. Fortunately, things worked out fine for her as she came up with her solo nightclub act.

In 1952, Charlotte Rae took to the Broadway stage as she played a part in Three Wishes for Jamie. She enjoyed slight success here as she acted alongside the likes of John Astin and Bea Arthur. Together, they played Threepenny Opera which was meant to uplift the act.

While working on her stage career, she also found some time to work on her music. She began recording her album dubbed Songs I Taught My Mother. A number of the songs featured in this album had been scripted by her college friend called Sheldon Harnick. At the time, she had already been married to John Strauss. He played a role as her music director. Moments later, her album was launched by Vanguard Records.

During the 1950s, Rae successfully landed herself on some TV appearances such as The Phil Silvers Show, United States Steel Hour, Play of the Week and several others. A decade later, Rae also became a familiar TV personality with the appearances she made in Car 54, Where Are You? After the show came to a halt in 1963, Raee turned her head back to Broadway.
In 1965, Rae was part of the nominees for the Tony Awards owing to the originality of the musical called Pickwick – 1965. Another similar nomination came after four years crediting her for the excellent job she had done on Morning, Noon, and Night.

Diff'rent Strokes & The Facts of Life

Charlotte Rae reached the epitome of her acting career with the role she played in Diff'rent Strokes. For many episodes, she took the part of Edna Garrett on this show. After featuring on the show for about a whole season, another spun off was released. Her role was continued in The Facts of Life new show.

On November 4th, 1951 Charlotte Rae tied the knot to songwriter John Strauss. The two however filed for divorce after realizing that Strauss was gay. They parted ways in 1976. Their marriage relationship gave rise to two sons namely Andrew and Larry. Rae has faced some health issues including the most recent diagnosis of bone cancer in 2017. Before this, she had been diagnosed with pancreatic cancer. This, however, was identified early and therefore amicably solved.