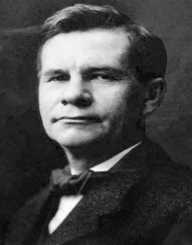 American furniture designer and manufacturer Gustav Stickley was born Gustavus Stoeckel on the 9 March 1858 in Osceola, Wisconsin to Leopold and Barbra Stoeckel. Both his parents were first-generation German immigrants to the United States. He was one of eleven children born into a family of modest means. His father was a farm labourer and stonemason.

After reaching the Sixth Grade, Gustav Stickley left school and began training to be a stonemason.

At the age of 12, Gustav Stickley began working as a stonemason. Stickley was 18 when he relocated to Brandt, Pennsylvania with his mother and siblings. He started working in a chair factory owned by an uncle, Jacob Schlager where he was taught the art of furniture-making. Within four years he had been promoted to foreman of the factory.

By 1898, Gustav Stickley had his own furniture business The Gustave Stickley Company, in Syracuse, New York. During a trip to Europe in 1895, he was exposed to the French Art Nouveau movement as well as the English Arts and Crafts movement. Inspired by the handcrafted movement, he began working with architect Henry Wilkinson and LaMont A Warner and created products which were called New Furniture.

The furniture was exhibited at the Grand Rapids Trade Show (1900), and the Tobey Furniture Company of Chicago became a distributor. In 1900 he rented the Crouse stables in Syracuse which he called the Craftsman Building and the following year, changed the company name to the United Crafts. The company name changed again to The Craftsman Workshops in 1903.  He also founded The Craftsman magazine which featured the work of William Morris and others involved n the Arts and Crafts movement as well as architects.

In November 1903, Gustav Stickley began offering subscribers free house plans homes, subject to certain conditions. Keeping his family home and factory in Syracuse, he moved the other parts of his business to New York City in 1906. In 1908 he bought farmland in the area of Morris Plains, New Jersey and developed Craftsman Farms. By the end of the first decade of the 20th century, Stickley had a successful business which operated on a national level and had an international reputation.

In 1913, he acquired what would become the Craftsman Building in mid-town Manhattan. A combination of World War I (1914-1918), competition and diminishing public interest in the Art and Craft movement caused financial problems for the company, and in 1915, Stickley was declared bankrupt. The Craftsman magazine ceased publication in 1916 and the following year, Stickley sold Craftsman Farms.

Gustav Stickley is credited with inspiring the American Arts and Craft movement, and in recent years original Stickley pieces have become highly valued. Craftsman Farms is a National Historic Landmark and a public museum.

Gustav Stickley married Eda Ann Simmons, and they had six children: Barbara, Mildred, Hazel, Marion, Ruth, and Gustav. After the failure of his business, Stickley spent his final years living in Syracuse and died on the 21 April 1942.