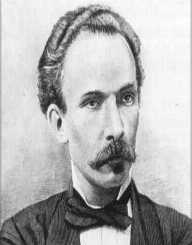 José Julián Martí Pérez was a Cuban journalist, professor, poet, and translator. Born on January 28, 1853, he was a prominent revolutionary figure, martyr, and a symbol of Cuba’s struggle for independence from Spain through his writings and political activities. Referred to as the “Apostle of Cuban Independence” Marti’s name later became synonymous with the independence struggle of many other Latin American countries.

Dedicated to the political independence of Cuba from his teenage, Jose Marti played a vital role in organizing and executing the Cuban War of Independence from Spain. He, however, died on the battlefield during the Battle of Dos Rios on May 19, 1895.

As a writer, he wrote for American and Latin American newspapers and founded the newspaper, Patria. He also wrote poems, novels, essays, children’s magazine, and lectures.

Marti enrolled at the Instituto de Segunda Ensañanza in 1866, with the help of Mendive and the following year joined the Escuela Profesional de Pintura y Escultura de La Habana (Professional School for Painting and Sculpture of Havana) for drawing lessons. After an unsuccessful venture into drawing, he continued his education at the Mendive founded school of San Pablo for his second and third-year bachelor’s degree in 1867.

During the outbreak of the Cuba Ten Years’ War in 1868, Jose Marti and Fermin joined the nationwide group formed to garnered support for the Cuban nationalist cause. He started publishing several write-ups to propagate his dream for an independent Cuba. His first political writing was published in the newspaper El Diablo Cojuelo in 1869 and followed it with the patriotic drama, “Abdala” in verse form in the La Patria Libre (“The Free Fatherland”) newspaper, which he had founded.

His involvement with the patriotic group ended in a  sentence to prison for six months with hard labour. In 1871, he was exiled from Cuba to Spain. While in Spain, he continued his education at the University of Zaragoza earning an MA and degree in law in 1874. He continued to publish political essays and travelled to countries like Mexico, France, and Guatemala.

Return to Cuba and Second Deportation

Jose Marti returned to Cuba in 1878 where he continued his political activism. For this, he was again deported to Spain in 1879. He later travelled to France, the United States and Venezuela in 1881. While in Venezuela, he founded the journal Revista Venezolana (“Venezuelan Review”). The political tonnage of his journal made him a target for Venezuela’s dictator Antonio Guzman Blanco and hence, he left for New York City the following year.

Jose Marti spent most of his life in New York. He continued with his writings, and his regular column La Nación of Buenos Aires gained him popularity in the Latin American countries. He was involved in the organisation of people and funds for the fight for the independence of Cuba. In April 1892, Marti was selected by the Cayo Hueso Club in Tampa and New York as a delegate to the Cuban Revolutionary Party, which he had helped found and funded. He made several journeys to meet exiled Cubans in the United States to provoke their conscience on the need to revolution and raised funds for the cause.

Return to Cuba and Death

Jose Marti returned to Cuba on April 11, 1895, and little did he know he was going to meet his death. He made contacts with the rebels who were preparing for battle against the Spanish. Marti died on May 19, 1895, on the battlefield while fighting the Spanish troops at the Battle of Dos Rios. The Spanish took possession of his remains and buried it close to the confluence of the rivers Contramaestre and Cauto, where he was shot. His body was later exhumed, reburied in Santa Ifigenia Cemetery in Santiago de Cuba.

Jose Marti's works especially essays are regarded as one of the best contributions to Spanish American letters. It contributed to changes in Spanish prose and promoted understanding between the American nations. In 1868, he wrote the poem En la Muerte de Miguel Ángel, which was dedicated to Mendive’s wife, A Micaela and published in Guanabacoa’s newspaper El Album.