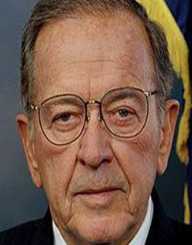 American politician Ted Stevens was born Theodore Stevens on the 18 November 1923 in Indianapolis, Indiana. He was one of four children born to Gertrude Chancellor and George Stevens. After the divorce of his parents when he was six years old, Stevens and his siblings were raised in Indianapolis by their paternal grandparents. Stevens’ three siblings joined their mother in California, and Stevens remained in Indianapolis caring for their father who had become legally blind.

Ted Stevens also helped care for a mentally disabled family member, Patricia Acker. By that stage, his grandmother had died, and his paternal grandfather was the head of the household. Stevens worked as a paperboy to help support the family (1932). In 1934, Stevens’ grandfather died. After his father died in 1957, Stevens and Patricia Acker went to live with Gladys Swindells, Acker’s mother, in California.

Ted Stevens was a pupil at Redondo Union High School (1942). He studied engineering at Oregon State University, but his studies were interrupted by World War II military service.

He was accepted into the Air Force Air Cadet programme at Montana State College (1943) and did preflight training in Santa Ana, California, graduating in 1944 as a pilot. Returning to California after the war, Stevens enrolled at the University of California in Los Angeles and obtained a BA in political science (1947). He was then accepted into Harvard Law School (1950).

During World War II, Ted Stevens served with the Fourteenth Air Force Transport Section of the US Army Air Corps (1944-1946). He was discharged in March 1946 with the Distinguished Flying Cross and Air Medal. The Chinese Nationalist government honoured his efforts with the Yuan Hai Medal.

After qualifying as a lawyer, Ted Stevens joined the law firm, Northcutt Ely in Washington, D.C. Around this time, he began to work as a volunteer for Dwight D. Eisenhower on his presidential campaign. After Eisenhower became President, Stevens was offered a job with the administration which did not happen due to spending cuts. In 1953, he relocated to Alaska where he joined the law firm of Collins and Clasby.

In 1954, Ted Stevens was appointed the US District Attorney in Fairbanks, Alaska. He built up a reputation as a tough prosecutor who was actively involved in raids. He returned to Washington D.C. in 1956 as Legislative Counsel for the Interior Secretary Fred Seaton. In 1960, he was named Solicitor of the U.S. Department of the Interior. The following year, he opened a law practice, Stevens & Roderick, in Anchorage, Alaska.

He ran for the U.S. Senate in 1962 but lost to the sitting member Ernest Grueni. He became a member of the Alaska House of Representatives in 1964 and majority leader in 1966. Then on the death of Senator E. Barlett, Stevens was appointed to the U.S. Senate on the 24 December 1968  by Governor Walter Hickel.

During his time in politics, Stevens encouraged industry in Alaska, and he helped to draft the Alaska Native Claims Settlement Act (1971), was involved in the construction of the Trans-Alaska Pipeline project (1977) and the opening the Tongass National Forest to logging as well as the protection of other wilderness areas.

Ted Stevens introduced a bill to provide more funds to fix the Exxon Valdez disaster (1989). He was instrumental in the US Congress supplying 10 million dollars to research nuclear waste dumped in the oceans. He was pro-drilling in the Artice National Wildlife Refuge but was outvoted on the matter. During his time as a US senator, over $3 billions worth of federal funds were secured by Alaska.

After media reports that Ted Stevens was involved in Alaskan companies who had benefited from legislation he was sponsoring, the Justice Department announced an investigation. The investigation examined Steven’s business dealings with Bill J. Allen, an ex oil-service company executive who had been accused of bribery. Allen claimed to have paid for renovations to Stevens’ Alaskan home. Stevens was indicted for failing to disclose this information (2008).

The subsequent corruption trial meant that Stevens lost his bid for re-election in 2008. The trial also and had an impact on Alaskan Governor Sarah Palin who at the time was John McCain’s running mate in the 2008 presidential election. The jury found Stevens guilty, but in 2009, a federal judge overruled the decision on the grounds prosecutorial misconduct.

Ted Stevens was named Alaskan of the Century in 2000 for his work representing Alaskans for over four decades and his efforts in building up the state. The same year Anchorage airport was renamed the Ted Stevens Anchorage International Airport. In 2007, Stevens was recognised as the longest-serving Republican senator in history. In July 2011, the Alaska State Legislature voted to establish the annual Ted Stevens Day on the fourth Saturday in July.

Ted Stevens married Ann Mary Cherrington on the 29 March 1952. The couple had five children, three sons, and two daughters. In December 1978, Cherrington died in a plane crash at Anchorage International Airport. Stevens was also onboard the flight but managed to survive the crash. In 1980, Stevens married Catherine Ann Chandler. The couple had one child, a daughter. Ted Stevens died in a plane crash in Alaska on the 9 August 2010. On a fishing trip, Stevens was travelling in a privately operated floatplane when it crashed close to Aleknagik, killing five of the nine people onboard.

After successful treatment for prostate cancer, Ted Stevens was involved in raising awareness of the disease and funds for medical research. He was recognised for this work by receiving a nomination for a Golden Glove Award from the National Prostate Cancer Coalition.