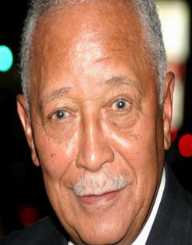 David Dinkins served as New York City's Mayor from 1990 to 1993. After his mayoral service, he turned to the world of academics by taking a post as an instructor at Columbia University.

David Norman Dinkins was born on July 10, 1927, in Trenton, New Jersey to William Harvey Dinkins Jr. and Sarah Lucy Dinkins. His father worked as a real estate agent while his mother worked as a domestic worker. When he was six years old, his parents separated, and the young Dinkins initially lived with his mother for a brief time in Harlem, New Jersey. Eventually, Dinkins lived with his father and his then-wife Lottie.

Dinkins graduated as one of the top students in his class in 1945 at Trenton Central High School. Upon graduation, he decided to enlist at the United States Marine Corp. He enlisted twice at the USMC since his first enlistment was rejected due to a racial quota. At the time of his enlistment, World War II has already concluded. Nevertheless, he did service from July 1945 to August 1946 and was also a part of the Montford Point Marines who were the recipient of the US Congressional Medal.

After graduating at Howard's, he pursued a degree in the field of law by enrolling in 1953 at Brooklyn Law School and attained his degree in 1956.

After his graduation in 1956 at Brooklyn, David Dinkins formed the law firm of Dyett, Alexander & Dinkins with Thomas Benjamin Dyett and Fitz Alexander where he worked for a brief time.

His official entry to the political world started with Dinkins' introduction to the George Washington Carver Democratic Club of Harlem by Daniel Burrows, his father-in-law. At the time, Burrows served as the State Assemblyman in New York.

In 1966, David Dinkins served at the New York State Assembly in 1966 of which he was also nominated by as Deputy Mayor, but he did not win. He did accomplish two political roles from the early 1970s to as New York City’s Board of Election president and as New York City clerk from 1975 to 1985.

David Dinkins became the first African-American to serve as mayor in New York City when he was elected on November 7, 1989. During his term, he launched the NYC Safe Streets, Safe City program that allocated more officers in the streets as well as develops community involvement. He paired up with United States Tennis Association to maintain the open tennis tournament in Queens and the renovation of Times Square in partnership with Disney.

Despite the launch of the Safe City program, the rise of crimes specifically homicide raised the tension among the people which prompted the 1991 Crown Heights riot. David Dinkins lost his reelection bid to Rudy Giuliani that ended his tenure as mayor.

He shied away from politics from there and turned to teach instead. He became a member of the School of International and Public Affairs of Columbia University served as the host of Dinkins Leadership & Public Policy Forum which is held annually.

In 2013, he published A Mayor’s Life: Governing New York’s Gorgeous Mosaic which was co-written by Peter Knobler. The memoir entails his life and works while serving as the Big Apple’s mayor.