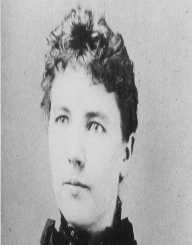 Laura Ingalls Wilder was a writer and autobiographer. She wrote the book Little House on the Prairie series.

Laura Elizabeth Ingalls was born on February 7, 1867, to Charles and Caroline Ingalls. She had an older sister Mary Amelia, and three younger siblings, her brother Charles Frederick died in infancy. She was born in the log cabin, seven miles north of the village of Pepin in the Big Woods region of Wisconsin. The site was commemorated by a replica log cabin, the Little House Wayside.

She was a descendant of the Delano family, the ancestral family of U.S. President Franklin Delano Roosevelt. Edmund Rice immigrated in 1638 to the Massachusetts Bay Colony, while Edmund Ingalls emigrated to America from Lincolnshire. Laura also had ancestors who were part of the Mayflower American colony in 1620.

Laura moved with her family to Kansas in 1869, her younger sister Carrie was born there. They departed in 1871, as their home was on Osage Indian reservation, and they had no legal right. They returned to Wisconsin, where they lived for the next four years.

Briefly, the Ingalls stayed in South Troy, Minnesota with relatives. They also moved to a dugout in Walnut Grove, Minnesota in 1874 before moving to Lake City. Her younger brother was born there and died nine months later. Laura and her family moved to Burr Oak, Iowa to run a hotel until 1879. Her father accepted a railroad job in eastern Dakota Territory, De Smet. Eventually, they settled there for the remainder of their lives.

Due to their traveling nature, the Ingalls taught themselves and each other. Sometimes they would attend the local school. Laura Ingalls Wilder studied to become a teacher for economic reasons; she gained her teaching certificate in 1882.

From 1883, Laura Ingalls Wilder taught three terms of school until 1885. She did not enjoy teaching but felt it was a necessity to supplement income. Laura also worked for the local dressmaker. She attended high school but did not graduate. She was fifteen years old when she signed on to teach at Bouchie School, 12 miles away from her home.

Laura’s parents often sent a fellow homestead, Almanzo Wilder to pick her up in his carriage. Laura married Almanzo Wilder on August 25, 1885, at a congregational church in South Dakota. In 1886, Laura Ingalls Wilder gave birth to her daughter Rose Wilder and three years later, a son. He died at 12 days of age before being named and was buried at De Smet, Kingsbury County. She quit teaching to help work on the farm and raise the children. Not long after, Almanzo contracted diphtheria and was partially paralyzed temporarily.

Their home was burned to the ground in 1890, along with grains and hay. Debt and illness forced them to move to Almanzo Wilder’s parents on their Spring Valley, Minnesota farm. To help with Almanzo’s health, the moved to Westville Florida but hated the weather there.

In 1894, the moved to Mansfield, Missouri. They named the place Rocky Ridge Farm, and Almanzo Wilder's parents visited gave them the deed to the house they had been renting in Mansfield, which boosted their income. Around 1910, they sold the house in town, moved back to the farm to expand on it. Laura became active in various clubs and was recognized as an authority in poultry farming and rural living.

Almanzo Wilder died in 1949, aged 92, leaving Laura alone on the farm. She lived alone for another eight years, surrounded by friends and neighbors. She continued to be active in her social life until her death in 1957, where she died in her sleep. Laura had undiagnosed diabetes and heart problems prior.

She was also secretary-treasurer of the Mansfield Farm Loan Association and used her connections and experience to begin writing for the Missouri Ruralist in 1911, her column there was “As a Farm Woman Thinks.” Later, she wrote for McCall's Magazine and The Country Gentleman. To gain more credibility among male readers, she used the androgynous pseudonym A. J. Wilder.

In the 1910s, her daughter, Rose Wilder Lane, was a reporter for the San Francisco Bulletin. Rose encouraged her mother to write about her experiences. The Pioneer Girl, Laura’s autobiography was rejected by publishers in 1920. She spent a few more years reworking it until Little House in the Big Woods was published in 1932. Laura Ingalls Wilder was seventy-six years old when she announced the last of her “Little House” series.

Professor William Holtz, Rose Wilder Lane’s biographer, had alleged that Rose was a ghostwriter for Laura’s books. Some other publishers argued that Laura mainly relied on Rose for encouragement and connections with literary agents and publishers. There have been speculations that Rose took the drafts and released them in series.

The diaries and manuscripts with notations for editing proved that Laura did collaborate extensively with her daughter. The written proofs showed that Rose had more substantial participation in some. Rose had a better style of writing, but Laura had the experience. In the end, it was widely accepted that Laura Ingalls Wilder was the real author of the books.