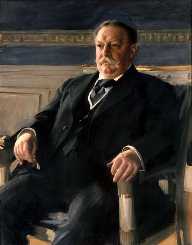 Anders Zorn was born on February 18, 1860, in Mora, Sweden. His parents were Grudd Anna Andersdotter and Leonhard Zorn. However, his parents were never married, and Anders Zorn never met his father. He was primarily raised by his maternal grandparents.

As a child, Anders Zorn studied at the Mora Stand School. He left school, and the town of Mora, when he was 12 years old. He moved to study in Enkoping. While here, his artistic talent began to show. It was around this time that he began making sculptures and carvings with wood.

When he was only 15 years old, he was accepted into the Royal Swedish Academy of Arts. While he was at this school, he studied various kinds of arts. One type of craft that he excelled in was sculpting. Even while still attending the school, his talent was well known. He was being hired for commissions before he finished school, which was in 1880.

Even though Zorn had focused on sculpting while in school, he began to focus on painting, primarily with watercolors, once he was out of school. In the 1880’s, Zorn also began traveling throughout Europe and in the United States. After touring in the United States, he lived there fro several years. Some of his most famous paintings from this time decade include Our Daily Bread and In Mourning.

In the early half of the 1890’s, Anders Zorn continued to paint, but during this decade he primarily focused on painting nude people. Most of these paintings were pictures of women outdoors or in other beautiful places. One of his famous paintings from this phases was Two Friends. His focus again changed in the late 1890’s, as he moved back to Sweden. Back home, he began to paint the people and scenery in his hometown of Mora.

Aside from painting, Anders Zorn was also a wonderful sculptor and etcher. He made hundreds of etchings and dozens of sculptures throughout his career. Some of these and some of his famous paintings are listed below.

Castles in the Air

Lucky with the Ladies

Castles in the Air

At the 1889 World’s Fair, he was named the Chevalier of the Légion d'honneur.

In 1881, a woman named Emma hired Anders Zorn to paint a picture of her. The painting was later called Emma Lamm in a Straw Hat. Soon after, the two fell in love. Anders Zorn later married Emma Lamm in 1885. The couple was married until Zorn’s death.

While alive, Anders Zorn and his wife created a folk high school in his hometown of Mora, Sweden. He also created a folk music contest. Both of these things helped to make folk music famous in Sweden in the early 1900’s.

After Zorn’s death, his wife made a museum which showcased some of his artwork. This museum opened in 1939.