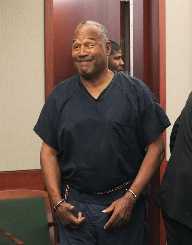 O.J. Simpson was born on July 9, 1947. He is a former American football player, actor, and commentator. He is referred to as ‘The Juice’ for his record-breaking career in football. He played for the ‘Buffalo Bills’ as a running back for eleven seasons. His name was inducted into the College Football Hall of Fame and the Pro Football Hall of Fame. In 2007, he was arrested in Las Vegas with charges of kidnapping and armed robbery. He is currently a convicted felon and confined at the Lovelock Correctional Centre in Nevada. He is serving a sentence of thirty-three years of imprisonment without parole.

O.J. Simpson was born on July 9, 1947, in California. He was born to Eunice and Jimmy Lee Simpson. His father was a bank custodian and chef while his mother was a hospital administrator. He was brought up alongside three siblings. His father left the family while he was still young and so he and his siblings were raised by their mother. While he was a teenager, he joined Persian Warriors which was a street gang. Simpson was later confined at the San Francisco Youth Guidance Centre. Simpson attended Galileo High School in San Francisco where he played football for the school team Galileo Lions. In 1965, he joined the City College of San Francisco where he played for both offense and defense.

Simpson was later inducted into the Junior College All American Team. In 1967, he joined the University of Southern California where he received as athletic scholarship and played as a running back. In the same year, he set the NCAA record by running in a USC sprint relay quartet. The following year he won the Heisman Trophy, the Maxwell Award, and the Walter Camp Award. The same year also saw him sign a television contract with ABC.

In 1969, Simpson joined the Buffalo Bills where he began his professional football career. In the same year, he was named the Man of the Year by the Sports Magazine. From 1972 to 1976, he topped 1,000 yards rushing. He is the record holder for being the first player ever to cover more than 2,000 yards in a season hence breaking a record of 1863 set by Jim Brown. In the 1970s Simpson acted in films such as ‘The Klansman,’ ‘The Towering Inferno’ and ‘Capricorn One.’ In 1977, he got an injury, and so his tenure with Buffalo Bills was cut short. In 1978, he was traded by Buffalo Bills to the San Francisco 49ers whom he played for until 1979. He was earning a salary of $806, 688 hence he became the highest paid footballer of NFL.

In 1979, Simpson retired due to a knee injury. In the same year he established his own production company known as Orenthal Productions. In 1987, he starred in the film ‘Back to the Beach’. He also appeared in the trilogy of ‘The Naked Gun’. He was also a commentator for ‘The NFL on NBC. He endorsed brands and products such as ‘Pioneer Chicken’, ‘HoneyBaked Ham’ and ‘Hertz’ Rental Car Company’ among other brands and products. He also entered into a deal with Chevrolet for $250, 000. In 1994, he was charged with the murder of his ex-wife Nicole Brown Simpson and Ronald Goldman, her friend. In 1995, he was exonerated of the charges. In 1997, Simpson was held liable by a civil court which passed an order against him for the payment of damages worth $33.5 million.

In 2001, Simpson was arrested in Florida following a traffic dispute, but he was released of the charges later on. In 2002, Simpson was arrested again in Florida for a traffic offense. In 2007, he was arrested with charges including assault, armed robbery, kidnapping and criminal conspiracy. In 2008, after the end of his trial, he was sentenced to thirty-three years of imprisonment with no parole for a minimum of nine years. He is currently imprisoned at the Lovelock Correctional Centre.

In 1967, O.J. Simpson married Marguerite Whitley with whom he had three children, Jason, Aaren, and Arnelle. In 1979, he divorced Whitley after he began having an affair with Nicole Brown. In 1985, he married Nicole Brown with who he had two children, Sydney and Justin. In 1992, Nicole filed for divorce citing irreconcilable differences. Simpson is currently sixty-nine years old.