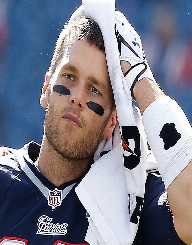 Tom Brady was born on the 3 August 1977 in San Mateo, California. Tom Brady is the son of Thomas Brady, Sr, and Galynn Patricia Johnson. He has three sisters: Nancy, Julie, and Maureen. Brady’s father is of Irish ancestry, and his mother comes from Norwegian, Polish and Swedish stock. His father’s people arrived in the US during the time of the Great Famine (1845-1852).

Tom Brady was a pupil at Junipero Serra High School, San Mateo, graduating in 1995. During his high school years, he played football, basketball, and baseball. After high school graduation, Brady enrolled at Michigan University where he majored in Organizational Studies. He played college football at the University between 1995 and 1999.

In 2001, Tom Brady had an opportunity to prove himself when quarterback Drew Bledsoe was injured. Brady showed himself to be a good leader with impressive physical strength. Coach Belichick decided to keep Brady as a quarterback in 2002 and Bledsoe left the team. Tom Brady then became a permanent member.

The team’s record that season was: 11 wins - 3 losses in the fourteen games that Brady started. They went on to beat the Rams at the Super Bowl XXXVI. Brady received his first MVP Award that year.

The Patriots had a second Super Bowl win in 2003, beating the Carolina Panthers at Super Bowl XXXVIII (Brady won his second MVP Award). Then in 2004, the Patriots beat the Philadelphia Eagles at the Super Bowl IX.

The Patriots resigned Brady to a six-year contract in 2005.

In 2006, their record was 12 win: 4 losses. The Patriots won all their games in 2007, apart from the Super Bowl XLII where the New York Giants beat them 17-14 at the University of Phoenix Stadium, Glendale, Arizona on the 3 January 2008. Brady injured his knee in the first game of the new season in 2008 and missed the rest of the season. He went on to have surgery and required physiotherapy and other medical treatment. There was some speculation that his career was over.

Tom Brady signed a new contract with the Patriots in 2010. In 2011, he returned to form, and the Patriots faced the New York Giants at Super Bowl XLVI. The Giants won 21-17.

The Patriots victory against Atlanta at Super Bowl LI was historic. Tom Brady became the first quarterback in the history of the game to be awarded five Super Bowl rings. He had previously held the record, along with Joe Montana and Terry Bradshaw, for four. Brady was also given his fourth MVP Award. He was playing in his seventh Super Bowl, an NFL record.

Many consider Tom Brady one of the greatest quarterbacks in history.

Tom Brady’s former partner was actress and model Bridget Moynahan. The couple split up in late 2006. In 2007 Moynahan announced that she was pregnant with Tom Brady’s child. She gave birth to a son, John Edward Thomas on the 22 August 2007.

Tom Brady comes from a Roman-Catholic family of Irish descent.