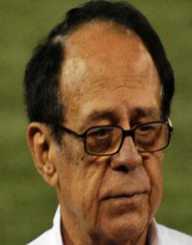 Aparicio broke the myth that in a game of baseball, power is the sole criterion to dominate the game. Relying on his formidable speed, superb fielding, durability, and toughness, he set the baseball world on fire in spite of his short and less powerful stature. By the end of his high school days, he attained a height of 5’ 9” and gained a weight of around 155-160 pounds, a considerably lower physical structure than the standard generally in vogue for baseball players.

Over the years, Luis Aparicio received a lot of valuable knowledge from his passionate baseball player father. He then embarked upon a journey of professional baseball games at the age of 19. He was inducted into the Venezuelan national team participating in the 1953 Amateur World Series to be held in Caracas. Later, in the same year, he appeared alongside his father for the local professional baseball team of Maracaibo.

His father played as the lead-off hitter in the 1953 home opener game. However, after taking the first pitch, he let Aparicio Jr. take his place at bat. Following his father’s footsteps, Aparicio Jr. began playing as a shortstop at this juncture. He played at this position only throughout his professional career. He also replaced his father in this position for the local team Maracaibo Gavilanes.

THE BIG DEBUT WITH WHITE SOX

The American baseball giant Chicago White Sox signed a deal with Luis Aparicio by the end of the year 1953. During the initial two years, he played for the minor league farm team Waterloo and the Memphis. His standout performance in the minor league farm system led to his inclusion in the major league in 1956.

Luis Aparicio quickly became an integral part of the Chicago White Sox. During 1957, his team held the first position in the major league until June. The team finished the season in the second position behind the New York Yankees. He was selected to play at the position of shortstop for the American league in the 1958 All-Star game.

Paired with second baseman Nellie Fox, Luis Aparicio formed a formidable defensive duo of fearsome reputation and ruled the American major league for seven consecutive seasons (1956-1962). Nellie Fox was his close friend in his personal life as well. Aparicio used to play as the lead-off hitter, and Fox used to come second to bat. Their great on-field chemistry often bamboozled their opponents. The duo delivered a terrific package on-field and hence was respected, liked and feared by their opponents and admirers alike.

In 1958, Aparicio won his first Gold Glove Award for leading the league in stolen bases, assists and putouts. He won a total of nine Gold Gloves Awards in his entire professional career.

In 1959, the Aparicio-Fox duo was instrumental in winning the American League Pennant defeating their arch rival the New York Yankees. Fox won the 'Most Valuable Player of the Year' with Aparicio coming in for a close second. Furthermore, the Chicago White Sox happened to win the coveted AL Pennant title for the first time in forty years.

THE END OF AN ILLUSTRIOUS CAREER

In 1963, Luis Aparicio was traded to the Baltimore Orioles. In 1966, he was the chief architect in winning the World Series title for the Baltimore Orioles. He retired after the 1973 season having played again for the Chicago White Sox from 1968 to 70. Aparicio ultimately signed off after playing with the Red Sox of Boston during 1971-72.

Luis Aparicio married Sonia Llorente on October 1, 1956. They together have five children. He went back to his native country Venezuela shortly after his retirement and co-owned a baseball team there.

Aparicio became the first Venezuelan to get inducted into the National Baseball Hall of Fame in 1984. He represented the American League All-Star Team for ten seasons. The first seven were consecutive seasons from 1958 to 1964, and the other three were from 1970 to 1972.