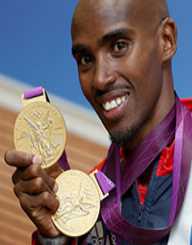 Mo Farah is one of the most decorated track and field athletes for Britain in the recent years. From an immigrant who barely knew English to an Olympic winning celebrity, Farah has won many awards and fans through his great running skills. He has been the Athlete of the Year for several times and is also known for his philanthropic works in Somalia.

Mo Farah was born in Mogadishu, Somalia on March 23, 1983. He is one of the six children of Muktar, an IT consultant, and Amran Farah. His full name is Mohamed Muktar Jama Farah. Born in an Islamic family, he was a devout Muslim from the start.

The family had to migrate from Somalia due to increasing violence and disturbances in the country. They moved to the UK when Farah was eight years old. One of his brothers Hassan was left behind due to illness, and they remained separated for 12 years. Farah had trouble adjusting to his new environment for he barely could speak English. He went to the Isleworth & Syon School and later to the Feltham Community College.

From an early age, Mo Farah had an athletic build. He loved football and wanted to become a soccer player. But owing to his endurance and strength, he chose to become a professional track and field athlete. As a runner, Farah has achieved unprecedented success. He has won several awards and gold medals competing in various championships including the Olympics.

Mo Farah started showing promise early in his career. He won several silver medals including the Silver Medal at the European Championship, Gothenburg in the 5000 m category. (2006). In the year 2010, he won the European titles in the 5000m and 10,000m category. The following year, he received training from Alberto Salazar in Portland, Oregon, USA.

2011 was an excellent year for Mo Farah. He won the Gold medal in 3000 m running at the European Indoor Championship. Then he got silver at the 10,000 m event at the World Championship in Athletics in Daegu, South Korea. At the same event, he won a Gold medal in the 5000 m category. He was the first British athlete to do so.

In 2012, Mo Farah competed in the Olympic Games. He brought Britain its first Gold medal in 10,000 m running. He also won the 5000 m event.
In 2013 he broke the European 1500 m record, and he won the 5,000 m and 10,000 m events at the World Championship in Moscow.
All these feats established him as a formidable champion in the track and field category.

After missing out on the Common Wealth Games in Glasgow, 2014 due to an illness, Mo Farah returned to create a record in the 2016 Olympics.
He successfully defended both his gold medals at the 2016 Rio Olympics.

Mo Farah has won several awards and honours throughout his career. The notable ones include multiple Athlete of the Year awards (2011, 2012, & 2016). In 2015, he was declared the runner of the year.

Mo Farah was made the Commander of the Order of the British Empire in 2013. He was made a Knight Bachelor for his contributions to athletics in 2017.

Mo Farah opened the Mo Farah Foundation in Somalia in 2011. He campaigns for the ill-fed and hungry people of his birth country.
After winning the full jackpot of the ITV’s game show The Cube, he donated the entire 2, 50,000 pounds to the foundation.

Mo Farah is married to Tonia Nell. Together they have three children – twin daughters Aisha and Amani and a son Hussein. From an earlier marriage of Tonia, Farah is also the stepfather of a girl named Rihanna.