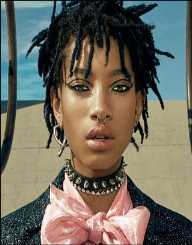 American dancer, actress, and singer Willow Smith were born to successful Hollywood actors Will Smith and Jade Pinkett-Smith on the 31 October 2000 in Los Angeles, California. She has an older brother Jaden and a half-sister, Trey Smith.

Willow Smith was mostly homeschooled, with the help of tutors.

Smith’s first film appearance was in I Am Legend, which starred her father. She then appeared in Kit Kittredge: An American Girl (2008) and later that year, did voice acting in Madagascar: Escape 2 Africa.

Smith’s first single Whip My Hair  (2009 reached charted at No. 11 in the US, and no.2 in the United Kingdom and gained platinum status. She recorded with rapper Nicki Minaj, but their singer Fireball did not do well.

Willow Smith continued experimenting with music and in December 2015, her debut album Ardipithecus came out. Her second album The 1st was released in October 2017.