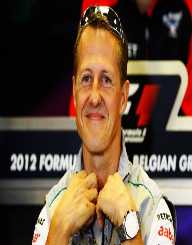 Michael Schumacher was born in Hürth, North Rhine-Westphalia, Germany on the 3rd of January 1969. He was born to Rolf Schumacher, a bricklayer, and his wife, Elisabeth. With the help of his father, he began his racing career at the age of four as the youngest member of the Karting club in Kerpen-Horrem. His parents were dedicated to the young boy’s racing career. So much so that both father and mother got additional jobs renting and repairing carts and working in the track’s canteen respectively to support their son.

The parents’ efforts were rewarded by their son who won his first club championship at the age of six. When the expenses of Michael Schumacher exceeded his parent’s means, he started to enjoy sponsorship from local businessmen. With a Luxemburg Karting License, Michael Schumacher won the German Junior Kart Championship in 1983 at the age of twelve. When he was of age, at fourteen, he got a German Karting license and continued to win several championships and be signed upwards with dealers and racing teams far ahead of his contemporaries.

Schumacher, along with his colleagues from Benetton were credited with turning the struggling Ferrari Team into one of the most successful teams in Formula One.

He retired from racing in 2006 and returned as a racing advisor to Ferrari. He was however enticed back into racing when he had to replace an injured driver in the Hungarian Grand Prix in Budapest. He joined Mercedes in 2010 and retired finally in 2013.

But this was not the end of his problems with the FIA. He had sometimes been accused of dangerous driving. He was involved in a couple of collisions in the 1997 season which led the FIA to punish him by making him participate in the Safety in Sports Campaign. He, however, continued with the campaign after serving the time of his punishment.

HUMANITARIAN WORK AND CONTRIBUTION TO THE SPORT

The veteran racer helped in the development of the first lightweight carbon helmet which was airy as well as almost indestructible.

Michael Schumacher has participated in several campaigns such as, the Road Safety campaign that appeals to the G8 and UN to give priority to road accidents as a global health issue. As well as, the campaign against drinking and driving. He contributed generously to raising awareness for child education. He had funded several projects that cater to destitute children, the building of schools, victims of war, etc.

He has donated tens of millions to these causes and several others. He is one of the highest celebrity donators to charity.

Michael Schumacher is an athletic man through and through. His other hobbies when he is not blazing down a race track involved galloping on horseback. He also played football for his local team FC Echichens.

He married his wife Corinna Betsch on the 1st of August 1995. They have remained married till date. They have two children together Gina-Maria and Mick. His son Mick is currently attempting to fill his legend father’s shoes on the race track or create his own. His seventeen year old son will be participating in the F3 championship in the 2017 season.

On 29 December 2013, Michael Schumacher suffered a severe head injury while skiing with his son Mick, in the French Alps. Although wearing a ski helmet, he had fallen and sustained a traumatic brain injury. It was said, however, that the helmet prevented his death. He was placed in a medically induced coma for six months and another three months of rehabilitation. He was released to go home in September 2014.

Matters of his health however still look grim. He is yet unable to walk and to form coherent words and sentences.

Michael Schumacher is generally considered one of the greatest Formula One drivers of all time. He is credited with making Formula One popular in Germany where it was previously on the fringes.

He is a man with many ‘mosts’ and ‘bests,’ most championships race victories, fastest laps races won in a single season, most consecutive podium finishes, etc. According to the Official Formula One website, he is "statistically the greatest driver the sport has ever seen."

Michael Schumacher has won several awards and recognitions during his career and for his contributions to humanity. These are only a few of them.

Also for his humanitarian efforts in sports and raising awareness of child education, he was named as one of the UNESCO Champions for sport in April 2002. In honor of his racing prowess and improvement of the safety and the sport, the FIA awarded him Gold Medal for Motor Sport in 2006.

Michael Schumacher won the Prince of Asturias Award for Sport in 2007 for his sporting proficiency and humanitarian efforts.

In his honor the Nürburgring racing tracks 8 and nine previously the Audi and Shell Kurves were renamed the Schumacher S.

Michael Schumacher’s combined wealth from racing and endorsements is estimated in 2010 at £515 million.