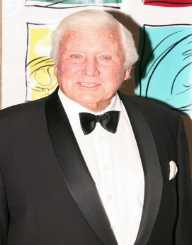 American television host and businessman Merv Griffin was born in Mervyn Edward Griffin in San Mateo, California on the 6 July 1925. He was a musical child who enjoyed playing the piano and singing. He also sang in the church choir as a boy.

Griffin was a pupil at a Mateo High School (class of ‘42), San Mateo Junior College and the University of San Francisco.

Griffin started out as a singer and performer, later appearing on Broadway and in film. He rose to prominence with the 1950 hit I’ve Got A Lovely Bunch of Coconuts.

He then started in some films including So This is Love (1953) and The Boy from Oklahoma (1953). Griffin also appeared on television in The Arthur Murray Party (1950) and The Jack Paar Tonight Show (1957). This led to Griffin being offered his own daytime talk show, The Merv Griffin Show (1962).

He then developed and starred in one of the world’s most successful television game shows: Jeopardy! (1964) and later The Wheel of Fortune.

An astute businessman Griffin amassed a fortune with interests in hotels, casinos and media outlets.

During his long career, Griffin won fifteen Emmy Awards including the Outstanding Game/Audience Participation Show award (1994) for his work on Jeopardy! In 1994 he was presented with the Broadcasting and Cable Hall of Fame Award, and he also received The Duke Award from the John Wayne Cancer Institute.

Merv Griffin had one child, a son, Tony Griffin.

In 2007 Griffin died from prostate cancer.