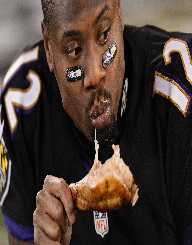 The Assistant Principal at Abramson, along with his godfather, encouraged Jacoby Jones to transfer to Abramson, which he did. Jones excelled in sport, becoming a letterman in football, basketball, and track.

He was an All-Metropolitan and All-Area selection in both basketball and track.

In 2002, Jacoby Jones enrolled at Southeastern Louisiana University on a track scholarship, but in 2003 he transferred to Lane College. He competed in the All-Southern Intercollegiate Athletic Conference in three seasons and also became known for his punt/return kicker abilities.

Jacoby Jones was drafted in the 2007 NFL Draft by the Houston Texans. Jones didn’t start his career in exceptional form, and after a mistake in the 2011 AFC Divisional Playoff game which cost the Texans the win, he was let go by the Texans on the 1st May 2012.

Only one short week later, on May 8th, he signed a two-year deal with the Baltimore Ravens, worth $7 million. Jones broke several records in 2012, and his excellent form saw him selected in the 2012 All-Pro team.

Jacoby Jones created another record whilst he was playing in the Super Bowl XLVII by becoming the first player to score both a receiving touchdown and return touchdown in the same game. His team went on to win the game.

In March 2014, Jacoby Jones briefly tried the free agent market, but he stayed with the Baltimore Ravens and signed a four-year contract worth $12 million, of which $4.5 million was guaranteed. The rest of the 2014 season wasn’t a good one for Jones, and in early 2015, the Baltimore Ravens let him go.

He then joined the Pittsburgh Steelers, but he was only with them for two months. Jacoby Jones then signed with Monterrey Steel early in 2017, but only played eight games.

In September 2017, Jacoby Jones amazingly signed a one-day contract with his old team, the Baltimore Ravens, so that he could finish his career with the club.

He was a Super Bowl champion, and a Pro Bowl champion. Jacoby Jones had a remarkable career over his journey.

Jacoby Jones wasn’t without his controversy. In 2008, Jacoby Jones was arrested for driving under the influence, and in 2009, pled guilty to the charge. In 2013, while partying on a bus, he was hit over the head with a champagne bottle.

In 2014, along with two of his teammates from the Baltimore Ravens, Jacoby Jones was thrown out of a nightclub in Maryland, for not being able to behave.