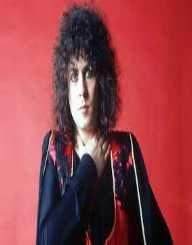 Marc Bolan was the founder of the British glam-rock band T.Rex. His song Bang a Gong also referred to as Get it On, was a major hit in the United States. He was famous for the trademark of glam-rock style.

Marc Bolan, originally named Mark Feld was born on September 30, 1947. His birthplace was at the Hackney Hospital, London. Bolan was raised up in East London. His mother was Phyllis Winfred and father Simeon Feld, who is believed to have been a lorry driver. Bolan developed an interest in music at a very young age. He was keen to follow the rock and roll of Gene Vincent, Chuck Berry, Arthur Crudup, and Eddie Cochran. By the age of 9, he was given a guitar that enhanced his passion. Bolan played at any chance he got at bars and restaurants.

Bolan went to Northwold Primary School, Upper Clapton. At school, he played his guitar in a trio performing Susie and the Hula Hoops. The vocalist was a 12-year-old, Helen Shapiro. Bolan was a musically gifted child. He practiced by playing his guitar to his friends in the school playground during class recess. At the age of 15, he was expelled from school for indiscipline.

After his expulsion from school, Bolan joined a modeling agency promoting men’s wear. He was featured in a town magazine as an example of the mod movement. In 1964, Bolan decided to face his music as a career. He released his first professional record titled All at Ones, with the help of his manager Geoffrey Delaroy-Hall. Bolan renamed himself Toby Tyler when he met Allan Warren who was to be his second manager. Warren then mentored Bolan and helped him release two more albums, In the Wind and the Road I’m On. It did not take long before Warren sold Bolan’s contract and recordings for $200. He had accrued rent arrears of three months from his landlord.

He used the money to clear the debt. This did go down well with his mother. A year later, Bolan’s mother confronted Kirch, Warren’s landlord. She felt that his son had been swindled out of the music contract. She demanded that Kirch tears the music contract, which he did. The result of this confrontation led to the loss of Bolan’s records for over 25years. However, in 1991 the records resurfaced and brought in a net value of about $8,000. They included some of Bolan’s earliest records.

In August 1965, Bolan signed another contract with Decca Records. He then changed his name to Marc Bolan. A name that was chosen by Decca Records derived from James Bolan. James Bolan is believed to have been a contraction of Bob Dylan. He recorded a single called The Wizard which was released on the 19th of November 1965.

In 1966, Bolan sought the audience of Simon Napier-Bells. After listening to his music, Simon managed to record his songs. Unfortunately, they were not successful due to the simplicity of the songs. The songs were never released until 1974, on the album The Beginning of Doves. However, the song You Scare Me to Death was used in a toothpaste commercial advertisement. Bolan Joined the Johns children in 1967. They managed to perform successful live shows. The financial returns were not promising, leading to a fall out to disbandment. Bolan together with Steve Peregrin formed the Tyrannosaurus Rex. The band played Bolan’s songs, they successfully released three albums and four singles. But his tenure did not last long. Bolan was dismissed from the band. The band fell out after a German gig that brought misfortune to the band.

Bolan shortened the band’s name to T. Rex and married June Child. The band recorded the song White Swan which gained popularity and was rated at number 2 on the British chart. This motivated Bolan to experiment more with the glam-rock music style. This became his music trademark. Bolan went on to expand his band with the addition of Bassist Steve currier and Bill Legend. They released the Hot Love which was later renamed Bang a Gong. The only hit that became U.S’s favorite.

On the 16th of September 1977, Bolan got involved in a car accident after hitting a tree. The accident claimed his life at the scene.

Despite all the challenges that Bolan experienced on his career path, he never gave up his passion for music. Success is all about persistence in what you believe in.

In his endeavor to promote his music, he got the honors of performing in the maiden Hyde Park free concert.