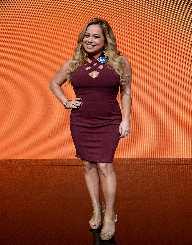 Sabrina Brya was born on 16 September 1984 Yorba Linda, California. She has a sister Starr, and her paternal ancestry is Mexican. Her parents are Fred and Kathy Hinojos.

Sabrina did her high schooling at Esperanza High School between 1998 and 2002. Then she enrolled at Chapman University in Orange, California. She graduated in 2007, having studied Advertising and Public Relations.

Sabrina trained at the Hart Academy of Dance. She appeared in the 1996 telemovie Mrs. Santa Claus with Angela Lansbury. Her break came when she auditioned for the Disney musical The Cheetah Girls. She was subsequently offered the part of Dorinda Thomas.

A dancer by training, Sabrina was a participant in the fifth season of Dancing with the Stars (2007) and scored 26 points out of 30 in the first week. Her partner was Mark Ballas, and they went on to obtain a perfect score in the fourth week. Sabrina also appeared on the fifteenth episode of Dancing with the Stars (2012). She danced with Louis van Amstel. They were eliminated in the sixth week.

Other Television And Film Work

Sabrina has had small roles in The Bold and The Beautiful, The Green Davis Show and the Jersey. She is the voice of Pamela Hamster in the Disney channel's Fish Hooks.

Together with Julia DeVillers, Sabrina has written a book entitled Princess of Gossip.

The Cheetah Girls propelled her to success.

Sabrina Brya keeps her private life relatively private, but she does use Twitter and has a following of over 10K. Her verified account is @SabrinaBryan

A keen sportsperson, Sabrina is an enthusiastic snowboarder; she also plays soccer and enjoys bowling.

Sabrina Brya has worked with Mission Foods and is involved in the Healthy Kids Challenge.