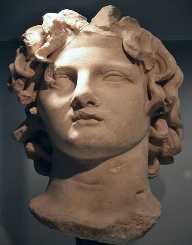 Alexander III was born in July 356 BC in Pella to Philip II of Macedon and his wife Princess Olympias who was from Epirus. During his youth, his father waged victorious battles throughout the Balkans.

Alexander was a skilled equestrian by the age of twelve. Plutarch describes his skill on horseback and how he impressed his father when he broke-in a wild stallion named Bucephalus. Alexander would ride this horse into all his battles.

When Alexander was thirteen, his father hired the Greek philosopher Aristotle to be his son’s tutor. For three years Aristotle tutored Alexander in literature, rhetoric, science, medicine, and philosophy.

After his father was assassinated in 336 BC, Alexander became king of a powerful yet unstable kingdom. He was quick to deal with his enemies at home and then set about asserting his authority in Greece and across the Persian Empire. Alexander led his army across Asia Minor, Syria and Egypt without suffering defeat and this culminated in his victory at the Battle of Gaugamela in 331 BC. By the time he was twenty-five, he was King of Macedonia, leader of the Greeks, in control of Asia Minor and a pharaoh of Egypt.

During the following decade, Alexander led his army another 11,000 miles. He founded dozens of cities and created a massive empire across three continents. The common language was Greek.

Alexander died in Babylon in June 323 BC. He had been suffering from a fever when he collapsed and died.