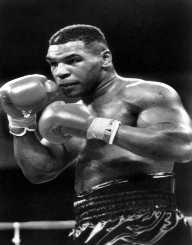 Michael Gerard Tyson was born on June 30, 1966, in Brooklyn, New York. His biological father was listed to be Purcell Tyson from Jamaica, but Jimmy Kirkpatrick raised him. He was one of the top baseball players in the neighborhood. The family lived in Bedford-Stuyvesant, but the financial troubles led them to move to Brownsville when Mike was ten years old. His mother died when Tyson was 16 and left him in the care of boxing trainer Cus D’Amato.
In his childhood, Tyson was living in high-crime neighborhoods. He was often caught committing petty crimes and fighting people who ridiculed him. He studied at the Tryon School for Boys in Johnstown. At the school, his boxing ability was discovered by Bobby Stewart, who was a Juvenile Detention center counselor, who introduced Tyson to D’Amato. In his junior year, Tyson dropped out of high school.

In 1981 and 1982, Mike  Tyson was fighting as an amateur with a lot of success. Both years, he won Junior Olympic Games. He also holds the Junior Olympic record for the quickest knockout- 8 seconds. When Tyson was 18 years old, he made his professional debut in Albany, New York, fighting Hector Mercedes. He knocked out his opponent in one round. His speed, strength and defensive abilities earned him the nickname Iron Mike.

1985 was a career success for Tyson, but he suffered through personal losses. His guardian D’Amato died of pneumonia. Kevin Rooney took over D’Amato to work with Tyson, and he continued to work towards advancing his career. Many of his future misdemeanors have been attributed to losing the one person who kept him on a straight path. When Tyson was 20 years old, he had a 22-0 record, and 21 of these matches he had one by knockout. In November, the same year, he was given the World Boxing Council heavyweight championship title. He became the youngest heavyweight champion in the world. The following year, he became the World Boxing Association champion and won the International Boxing Federation title.

After his first marriage, Tysons performance declined, and his behavior became more and more erratic. He dealt with his issues and in 1989 came back to ring. He defended his boxing title. In 1990, he was knocked out for the first time in his career by boxer Buster Douglas in Tokyo, Japan. Although he lost his title, Tyson recovered and won a fight against the Olympic gold medalist Henry Tillman.

In 1990, Tyson lost a court fight where he was found guilty of a barroom incident with Sandra Miller in 1988. The following year, he was accused of raping Desiree Washington in her hotel room. He was found guilty of the rape and two counts of deviant sexual conduct. In 1992, Tyson was ordered to serve six years in prison. While in prison, Tyson converted to Islam and took the name, Malik Abdul Aziz. After serving three of his six years in prison, Tyson was released. He planned his comeback fight with Peter McNeeley in Las Vegas. He won the fight by knocking out his opponent.

After many setbacks in his personal life and professional career, Tyson realized that he needs to make positive change. His career was back on track by winning several fights. In 1996, he was fighting Evander Holyfield for the heavyweight champion title. He lost the fight when he was knocked out in the 11th round. Holyfield made history, by becoming the heavyweight champion three times. Tyson disputed that Holyfield made several illegal head butts.

Tyson was not giving up and trained for a rematch with Holyfield in 1997. The fight was broadcasted on TV as pay-per-view, and set the record for highest number of paid TV viewers, reaching 2 million households. The fight took an unexpected turn, when Tyson bit both of his opponent’s ears, completely severing a piece of Holyfield’s right ear. Tyson reasoned that it was retaliation for Holyfield’s illegal head butts, but judges didn’t agree and disqualified him.

Tyson’s boxing license was revoked in 1997 by a unanimous vote. He was fined $3 million for biting off Holyfield’s ear. After this, many more lawsuits followed, by Tyson being both plaintiffs and offended. In 1998, Tyson’s struggles to reinstate his boxing license finally paid off, and he was allowed back in the ring. This came just before Tyson was again sent to prison for attacking motorists in Maryland. After spending nine months in prison, Tyson went back to ring.
In 2002, Tyson fought the champion, Lennox Lewis. He was again fighting for the heavyweight champion title, but lost by a knockout. He was fighting until 2005, but his performance was declining. Tyson announced his retirement in 2005.

His first marriage was in 1988, to Robin Givens. There were several allegations of spousal abuse. She and her mother were requesting Tyson a $3 million down payment for a house in New Jersey, which he refused. Police was also called to their home one time after Tyson threw out belongings of his wife out of the window and forced her and her mother to leave. They divorced in 1989.

In 2003 Mike Tyson divorced from his second wife, Monica Turner on the grounds of adultery. The same year he also filed for bankruptcy. To earn some income, Tyson was fighting several exhibition fights. In 2006, he was arrested for nearly crashing into a police SUV. He was stopped by police that suspected him of driving under the influence. When searching him, police found cocaine and other drugs throughout his vehicle. He pleaded guilty to possession of narcotics and was sentenced to 24 hours in jail and 360 hours of community service.

Tyson started attending Alcoholics and Narcotics Anonymous meetings. In 2009, he suffered yet another personal loss, when his 4-year-old daughter accidentally strangled herself on a treadmill in her mother’s house. Tyson is a father of 7 children.