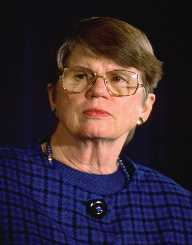 Janet Wood Reno was born 21st July 1938, to Henry and Jane Reno. She was born in Miami, Florida, in the United States. Both of her parents were reporters – her father worked with The Miami Herald, her mother, with The Miami News. Reno was the oldest of four children.

Reno studied at Coral Gables Senior High School, and finished as valedictorian at the school, as well as being the debating champion. She then attended Cornell University, with chemistry as her major.

After graduation from university, Reno enrolled at Harvard. She graduated in 1963.

After graduation, Reno worked as an attorney for private law firms until 1971, at which time she was appointed to the Judiciary Committee of the Florida House of Representatives.

In 1972, Reno ran for a seat in Florida’s state house but was unsuccessful. In 1973, she accepted a role with the Dade County State Attorney’s Office. The team was led by Richard Gerstein, and shortly after joining the team, Reno became his chief assistant.

In 1976, Reno resigned from the state attorney’s office to resume working in a private law firm, Steel, Hector & Davis, as a partner.

In 1977, Gerstein retired, and Reno was one of two candidates he recommended as a replacement.

Reno accepted the position of State Attorney for Dade County in January 1978. In November that year, she was elected to the Office of the State Attorney, and she was voted back in a further four times.

She had 95 attorneys under her management and handled over 15,000 felonies, and 40,000 misdemeanors on a yearly basis. Reno established a reputation for being fair and ethical.

In 1980, Reno prosecuted five white policemen who allegedly beat a black insurance salesman to death. The police were acquitted, and riots ensued, with looters and people being killed. Reno bore the blame at the time.

During the 1980s, Reno went on a personal crusade against child abusers. Even though she got many convicted, many were acquitted or released at later dates. Her methods were deemed questionable, and with all the releases, obviously did not stand up under legal scrutiny.

In 1993, Reno was nominated to the position of United States Attorney General. Although Reno wasn’t necessarily experienced in the Justice Department or Federal law, she did have her criminal law experience from being in her position of State Attorney.

Reno was accepted to the position with a vote of 98 – 0. She was the first U.S. Attorney General and had 95,000 staff under her supervision. Reno remained in the role for the remainder of President Clinton’s term in office, which made her the longest serving Attorney General since 1929.

Reno ran for Governor of Florida in 2002 but was unsuccessful.

In 2006, Reno joined the speaking circuit and toured the U.S. speaking on topics relevant to the criminal justice system.

In 2004, Reno was one of the founding member board of directors for the Innocence Project. The Project helps prisoners who are exonerated through DNA testing.

In 2013, Reno was Director Emeritus of the Board of Directors.

2008:   Professionalism Award from the Council on Litigation Management

2009:   Justice Award from the American Judicature Society (the highest award given by the Society to recognize significant contributions in the administration of justice in the United States)

Reno lived a very active, social life, but never married or had children.

She died on 7th November 2016 from Parkinson’s disease.