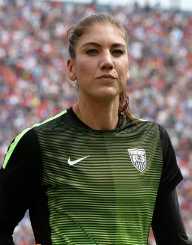 Hope Amelia Solo was born 30th July 1981. She was born to Jeffrey and Judy Solo, in Richland, Washington, United States. Solo has a brother named Marcus

Hope Solo's parents divorced when she was six years old. She lived with her mother, but remained in contact with her father throughout the years, particularly when she was attending college in Washington. It was her father who taught her to play soccer when she was a youngster.

Hope Solo played soccer while attending Richland High School, and her position as a forward saw her score 109 goals. The team won three consecutive league titles from 1996 to 1998, as well as a state championship. Solo also played for a local team called the Three Rivers Soccer Club.

After high school, Hope Solo studied at the University of Washington, from 1999 to 2002. She continued her soccer at university but switched from being a forward to being a goalkeeper. The position suited Solo, who went on to become the top goalkeeper in Pac-10 history.

When Hope Solo finished at university, she was selected in the first round of the 2003 WUSA Draft by the Philadelphia Charge. She only started in three games for the season. At the end of the 2003 season, the WUSA folded.

Hope Solo took the opportunity to move to Sweden, where she played in the Swedish Premier Division during the 2004 season, for Kopparbergs/Goteborg Football Club.

In 2005, she moved on to France, where she played in the French First Division, for Olympique Lyonnais.

At the 2007 FIFA Women’s World Cup, Solo was the starting goalkeeper for the United States.

Hope Solo was named in the U.S. women’s soccer team for the 2008 Summer Olympics. The Americans went on to win gold.

Hope Solo missed a good portion of the 2011 season due to recovery from shoulder surgery, and also preparing for the 2011 FIFA Women’s World Cup, as she was named in the U.S. team.

In early 2012 the WPA suspended operations due to financial difficulty and eventually folded.

In February 2012, Hope Solo signed with the Seattle Sounders Women. She only played in three matches during the season, mainly because of training and preparation with the national team for the 2012 Summer Olympics. Solo would go on in the Olympics to win her second gold medal.

In 2013, the National Women’s Soccer League had their inaugural season, replacing the WPS. Solo was allocated to the Seattle Reign Football Club. In October the same year, there was the talk of Solo transferring to Manchester City in the UK, but she returned to Seattle Reign in 2014 to protect her place in the national team.

Hope Solo was once again selected for the U.S. team to participate in the 2015 FIFA Women’s World Cup.

In 2016, Hope Solo was still playing with Seattle Reign but only made eight appearances due to preparation for the 2016 Summer Olympics. Solo’s national team contract was finished in August 2016, due to a controversial remark she had made about the Swedish Women’s National Football Team. Solo had the rest of the season off on personal leave.

Hope Solo has had a stellar career and is deemed one of the top female goalkeepers in the world. She holds several records and has won many awards, including two gold Olympic medals.

Hope Solo released her autobiography in 2012, called, Solo: A Memoir of Hope.

She has also appeared in several television programs and documentaries and has featured on magazine covers for the likes of Vogue, Fitness, and Sports Illustrated.

Hope Solo is not without controversy. She was arrested in June 2014, on two counts of assault in the fourth degree. One count was against her nephew, the other against her half-sister. She pleaded not guilty and was released the next day. In January 2015, the judge dismissed the charges.

There was, however, an appeal, and the charges were reinstated in October 2015.

Hope Solo represents the Women’s Sports Foundation, founded by Billie Jean King. She is also involved in the Boys and Girls Club, donating time and money to raise funds.

Hope Solo has also been involved in other charity events to raise money for different organizations.