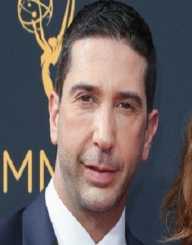 David Lawrence Schwimmer was born 2nd November 1966, to Arthur and Arlene Coleman-Schwimmer. He was born in Queens, New York, in the United States. Schwimmer has one sibling, an older sister, and both his parents are attorneys.

Schwimmer's family moved to Los Angeles when he was a youngster. He acted in a local production at the age of ten, and, consequently, he fell in love with acting. He loved the experience when he attended a Shakespeare workshop three years later.

The family then moved to Beverly Hills. As a result, Schwimmer studied at Beverly Hills High School, and he graduated in 1984.

Schwimmer moved to Chicago and enrolled at Northwestern University. He studied acting, and he was, by this time, also performing in school productions. Schwimmer graduated from university in 1988.

David Schwimmer's first credited role was in 1989. He appeared in a television movie called, A Deadly Silence.

After starting to win regular television work, Schwimmer made his film debut in 1991. He acted in a movie called Flight of the Intruder.

Although he appeared regularly in movies, he also acted regularly on television in shows like L.A. Law, and NYPD Blue.

In 1994, David Schwimmer's big break came. He won a role in a television comedy series called, Friends. The show went on to become one of the most popular shows on television. It ran for ten years, finishing in 2004. Schwimmer appeared in 236 episodes.

David Schwimmer moved into producing and directing in 1996.

He has been the executive producer for six television series episodes or movies. As well as producing, Schwimmer has also directed 12 episodes or films.

David Schwimmer is very versatile with his performances, and he has acted on stage in several productions.

In 2005, he starred in the London production called, Some Girls.

In 2006, he starred in The Caine Mutiny Court-Martial. The production was his first appearance on Broadway.

David Schwimmer received nominations for over 30 awards between 1996 and 2007.

His wins include a Satellite Award and a Screen Actors Guild Award. He also has one TV Guide Award.

In 2010, David Schwimmer married Zoe Buckman. The couple has a daughter, Cleo, but they separated in April 2017.

Schwimmer serves as a Director for the Rape Treatment Center in Santa Monica.