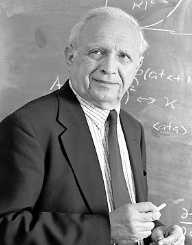 Martin Lewis Perl was born on June 24, 1927, in New York City, New York to Oscar and Fay Perl. Their Polish nation was under the Russian government at the time his parents immigrated to the US.

Martin Lewis father was a printing business owner. His mother worked for a textile firm.

Perl was a brilliant student, and he excelled academically. In 1942, he enrolled at James Madison High School. He was particularly good at Physics and had won a prize, but Perl did not consider becoming a scientist. He wanted to do a profession that can give him a decent living. He took chemical engineering instead of physics research.

Martin Lewis Perl registered at the Polytechnic Institute of Brooklyn for a course in chemical engineering after finishing high school. But then, he had to leave his studies with the start of World War II. He studied instead of a course in the United States Merchant Marine Academy. Later he was drafted into the army for a year. He continued his studies after the war and graduated in 1948 from the institute.

Martin Lewis Perl efficiently completed his education in the Marine Academy. He then picked a position at General Electric as a chemical engineer. His job was to produce electron vacuum tubes. He studied at Union College, Schenectady, New York. Here, he took a further a course in atomic physics and advanced calculus. He was very curious and had the great interest in the working of television tubes.

Perl decided to study Physics in more detail and 1950; he finished his study in Physics. Then he started his Ph.D. studies at the Colombia University. He completed his thesis on using the atomic bean resonance method on the measurement of the nuclear quadrupole moment of sodium. He obtained his Ph.D. in 1955.

For eight years, Martin Lewis Perl worked at the University of Michigan after obtaining his Ph.D. With the aid of bubble and spark chambers, he experimented the scattering of pions and later neutrons on protons. He strived for a simpler interaction mechanism to study, though he worked on the physics of strong interactions. He delivered a firm consideration on electron and muon interactions.

Martin Lewis Perl moved to Stanford Linear Accelerator in 1963. He had an ardent desire to satisfy his curiosity in the study of the eclectics of muon at Stanford. He experimented on why muon interacted precisely like the electron despite being 206.8 times heavier and the reason it decayed through the route that it does.

His pursuit of the knowledge of muon led him to a series of experiments. He wanted to know the reasons why there was a single muon. And questions like if there was a possibility that more muons’ existed?

Together with his group, Martin Lewis Perl intended at finding an even more massive electron than muon. He deliberated that in the grand scheme of things that would help explain the role of a muon. He understood that such particles could be figured out only through a new collider. He used the Stanford Accelerating Ring for this. The process that would eventually lead to the decay of particles radioactively leaves behind a distinctive trail of subatomic debris.

Martin Lewis Perl began a stunning success of his career in 1973. The Spear machine became operational, colliding electrons and positrons in higher energy. This produces tiny fireballs. The prognosis of the experiment was that each collision led to the production of a particle. The determined existence of the unknown particle was just 2.9 x 10-13 fraction of a second in time, which leads to its decay within few millimeters of the collision.

It was clear by 1975 that there existed something that was heavier in mass than an electron. Perl held a conference and made his discovery of a new particle known to the public.

Initially, Perl’s discovery of the new particle met with a lot of criticism. He was heavily criticised because of the lack of logical explanation for his development. Perl and his group took more than two years to collect and establish the existence of the new particle. They named it as ‘Tau,’ the elementary particle similar to an electron. ‘Tau’ together with electron and muon formed a triad.

‘Tau’ has a Greek connotation and it is a word that means ‘third.’ It was 3500 times as massive as the electron. Tau is the heaviest of the electron brothers. Even with its enormous size, it lived for only a third of the trillionth of a second before decaying. This is faster than of its lighter brethren, neutrinos.

Accordingly, matter in the physical world is divided into two sets of six particles each. Six leptons were comprising of three electrons of three electron brothers and three neutrinos and six quarks which make up for innards of particles protons and neutrons.

After his excellent discovery of the tau lepton, Martin Lewis Perl did not give up on his research career. He collaborated with the scientist at SLAC. He continued his research work like the one investigating dark energy and many other projects.

Martin Lewis Perl was a renowned American physicist. He discovered the existence of the subatomic particle – tau lepton. This helped to understand elementary physics better. He was decorated in 1995 with the Nobel Prize in Physics for is significant work in particle physics. Presently he is known as the prodigious child of physics. When he was young, Perl wasn’t keen on pursuing research as his profession. He opted to study chemical engineering as a prospect to make a better living instead of research in physics.

Nevertheless, while working as a chemical engineer, he continued studying physics. It was as if the fate of this man who was born-genius has to pursue physics in his life. He soon obtained his Ph.D. in the subject. He spent eight years at the University of Michigan then took up a research work at the Stanford Linear accelerator Center (SLAC).

It took Martin Lewis Perl several years of experiment to verify the existence of a new particle. His study which was initially criticised by the scientific society was later accepted. He was honored with the highest academic recognition in 1995. He was awarded the Nobel Prize in Physics for his discovery of tau lepton.

Martin Lewis Perl’s fantastic discovery of Tau established the fact that there was an additional family of particles. There were two previously known families and the tau lepton particles. He received the Nobel Prize with physicist Frederick Reines, who discovered another subatomic particle called the neutrino in the 1950’s.

Perl served on the board of advisors of Scientist and Engineers for America. It is an organization focused on promoting comprehensive science in American government.

Martin Lewis Perl was awarded an honorary doctorate from the University of Belgrade in 2009.

Martin Lewis Perl was married to Teri Hoch Perl. They were blessed with a daughter and three sons.