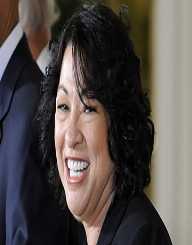 Sonya Sotomayor was born on June 25, 1954, in the Bronx. New York City. Her parents were Puerto Ricans. Sotomayor’s mother was a nurse, and her father- a tool and die, worker. She also had a younger sibling. The family used to live on very small income.

Sotomayor first became interested in law, after watching the television show Perry Mason. Her father died in 1963, and her mother had to raise the children alone. Her mother insisted on her children to get a higher education and encouraged them to study hard. Sotomayor’s mother brought books and encyclopedias and made sure that her children have

When her husband died in 1963, Celina worked hard to raise her children as a single parent. She placed what Sotomayor would later call an "almost fanatical emphasis" on higher education, pushing the children to become fluent in English and making huge sacrifices to purchase a set of encyclopedias that would give them proper research materials for school.

Sonya Sotomayor attended the Cardinal Spellman High School and graduated in 1972. She was accepted to Princeton University. Being overwhelmed by the new school, she started out with low grades. Sotomayor began actively taking part in several Puerto Rican groups and sought help to improve her grades. Sotomayor soon began working with the discipline group of the university, which helped her to develop her legal skills.

In 1984, Sonya Sotomayor became a private practitioner of law and began working at Pavia & Harcourt as a partner. Her specialty was intellectual property litigation. In 1988, she became the associate partner of the firm. At the same time, Sotomayor was serving on the board of Puerto Rican Legal Defense and Education Fund. Sotomayor began to garner a lot of attention from Senators like Ted Kennedy and Daniel Patrick Moynihan since she was doing a lot of pro bono work. She was nominated for U.S. District Court Judge for the Southern District of New York City in 1992. She joined the court and became the youngest judge on the court. In 1997, President Bill Clinton nominated her for U.S. Second Circuit Court of Appeals.

While working at the Court of Appeals, Sotomayor began to teach law at the New York University and Columbia Law School and served on the Board of Trustees in Princeton.

Her career continued to rise the ladder, and in 2009, President Barack Obama nominated Sotomayor for the position of Supreme Court Justice. She was confirmed in August 2009 and became the first Latina Supreme Court Justice in the history of United States. As Supreme Court Justice, Sotomayor was best known for the ruling on the 2010 Affordable Care Act in King v. Burwell. The decision allowed the government to continue providing subsidies to the citizens who purchase healthcare through exchanges. The same year, she was also one of the judges in the ruling of Obergefell v. Hodges, making same-sex marriage legal in all 50 states.