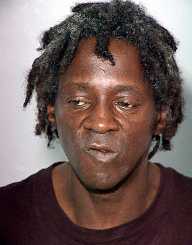 TASTING THE FLAVOR OF LOVE

Born on 16th March 1959, in Roosevelt, Long Island, New York, as William Jonathan Drayton, Flavor Flav was a musical genius right from a very young age. He started playing the piano when he was just five years old and over time mastered the art of playing various instruments. He also sang at his church in youth choirs. Drayton’s father was the owner of a small restaurant called Soul Diner.

In his childhood days, the New York musician was infamous for being a troublemaker. He had accidentally set ablaze his family home while playing with lighters.

Flavor Flav was an 11th-grade school dropout. However, he managed to complete his graduation in 1978. Being a culinary school graduate, Flav started cooking and worked at several restaurants.

It was during his graduation days, Flav came in contact with Carlton Ridenhour, who later took up the stage name ‘Chuck D.’ Chuck and Flav’s love for music laid the foundation stone for their friendship. Chuck D was studying graphic design at Adelphi University, and in the same university, Flavor Flav had enrolled for a Bachelor’s Degree Program in Business and Radio Communications. Initially, the two passionate musicians started working together on Chuck D’s hip-hop radio show. Post-graduation, they worked as delivery boys for Chuck D’s father’s business.

1982 marked the launch of the hip-hop group Public Enemy. Flavor Flav and Chuck D had teamed up with Norman Rogers and Richard Griffin who later took the stage names Terminator X and Professor Griff. The group’s first work together was a track named ‘Public Enemy #1’ which drew Rick Rubin’s attention towards their group. Rick Rubin, executive of Def Jam Records, was highly impressed by their work and inked a deal with them in 1986. The deal resulted in the release of Public Enemy’s first album ‘Yo! Bum Rush the Show’ in 1987.

In 1988, Public Enemy released their album ‘It Takes a Nation of Millions to Hold Us Back’ which turned out to be a chartbuster and established them as the king of the hip-hop world. Public Enemy’s flavor of work was political and antagonizing. Chuck D had a powerful persona and was the promotional voice for the group. Beside Chuck D’s grim style, Flavor Flav’s playful, vibrant persona on stage and comic style endeared him to his fans and was a major reason behind the group’s success. His signature look consisted of a giant clock which he wore around his neck and his catchphrase was “Yeah Boy!’

Flav’s first independent work was ‘Life of a Nigerian,’ a song in which he was the solo rapper.

Flavor Flav has also tasted success with his TV and media appearances. In 2004, Flavor gained much fame as a reality TV star through his participation in VH1’s television series ‘The Surreal Life.’ In this show, he started dating co-contestant and actress Brigitte Nielsen.

The couple was offered another show by VH1 called ‘Strange Love’ which showcased their globetrotting adventures in love. Flav was also the main star of the dating game show ‘Flavor of Love.’

The rapper was featured in The Comedy Central Roast of Flavor Flav in 2008. He was the host of ‘Nite Tales: The Movie’ and has also essayed the role of Calvester Hill in MyNetwork’s TV sitcom, Under One Roof.

He returned to music in 2006 with his solo album ‘Flavor Flav’ more popularly known as ‘Hollywood’ but the album received a lukewarm response.

Flavor Flav’s life is marred with controversies. His addiction to drugs proved to be a major deterrent for this child prodigy. Flav was a notorious burglar, and by the time he reached his teens, he had already done several rounds in and out of jail. He made headlines for his misdemeanor, over-speeding, and driving without a license. He has been booked for molesting his girlfriend, Karen Ross and for the attempted murder of his neighbour.

Flavor Flav went around with many women and had fathered seven children with his three girlfriends Karen Ross, Angie Parker and Elizabeth Trujillo (Liz). He currently lives in Las Vegas, Nevada with his wife, Liz.